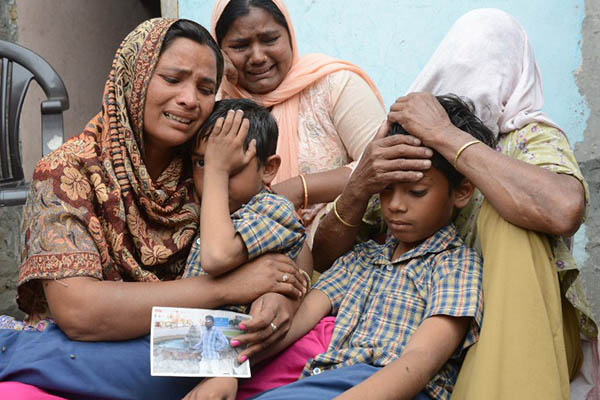 The bodies of 39 Indian construction workers kidnapped in Iraq in 2014 by the Islamic State group have been found in a mass grave, India’s foreign minister said on Tuesday.

Sushma Swaraj told the upper house of parliament the workers had been murdered by I.S. Their bodies had been found in the grave in the village of Badush northwest of the city of Mosul and taken to a local organization for DNA testing.

“Yesterday they told us that 38 samples had matched. The 39th had a partial match as he didn’t have any immediate family,” said Swaraj.

The workers were abducted in June 2014 when I.S. jihadists overran large swathes of territory in Iraq and captured Mosul. The government had for years insisted they were believed still alive and the latest announcement sparked criticism from some relatives of the dead.

The victims were mostly from poor families in India’s northern state of Punjab and had been working for a construction company in Mosul when they were rounded up. “We got to know that these people were moved from Mosul to Badush by their captors,” Swaraj said.

When India’s junior foreign minister Vijay Kumar Singh and Iraqi government officials went to Badush, someone told them to inspect a mound in the village, the minister added. “They said that they had buried many people there [in a mass grave]. We reached there and requested Iraqi authorities to use a deep penetration radar, which detected many bodies under the surface,” she told parliament.

When the area was excavated, Indian officials found many identification marks such as non-Iraqi shoes and Sikh religious bangles. “We felt these were our people… contacted a foundation working on the issue and shared missing workers’ families’ DNA samples with them for the identification process,” the foreign minister told parliament.

The Indian government had never received any ransom demand or any other direct communication from the kidnappers.

Prime Minister Narendra Modi expressed anguish and backed the foreign ministry, saying officials had “left no stone unturned in trying to trace and safely bring back those we lost in Mosul.”

“Every Indian grieves with those who lost their loved ones in Mosul. We stand in solidarity with the bereaved families and pay our respects to the Indians killed in Mosul,” he tweeted late on Tuesday.

A special plane will bring 38 of the 39 bodies home after formalities are completed in Iraq. The DNA matching process is still incomplete for the final victim. “Howsoever painful, the families will get the dead bodies after over three years. This will hopefully bring some closure to the grieving families,” Swaraj said.

Some relatives, however, criticized the government. “For the last four years the same minister has been telling me that we have traced their location and they’re alive,” Gurpinder Kaur, sister of one of the dead workers, told reporters in Punjab. “I only heard what the minister said on television. I have no other information about it. I am waiting for her to contact me but I don’t know what to trust,” she added.

“My heart goes out to the families who had been living in hope since their reported abduction by ISIS in 2014. Prayers with all of them,” he said, using another acronym for the Islamic State.

Shashi Tharoor, a lawmaker from the main opposition Congress party, told journalists the government had not done right by the families. “If the government didn’t have any details, why did they keep telling everyone they are alive? The government cheated the people [families] by giving them false hope for four years,” he said.

At a press conference later, Swaraj denied the government had given families false hope, insisting it had needed proof before confirming any deaths. The minister also could not say when the hostages had been killed.