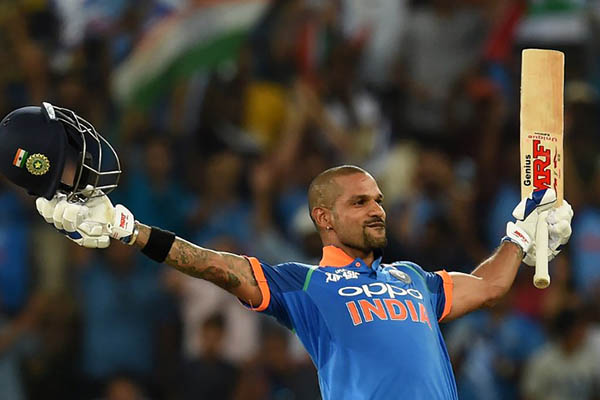 Openers Rohit Sharma and Shikhar Dhawan hit punishing centuries to steer an imperious India to a nine-wicket win over a listless Pakistan in the Asia Cup match in Dubai on Sunday.

Sharma notched a 119-ball 111 not out for his 19th one-day hundred while Dhawan made a 100-ball 114 for his eighth century as the pair put on 210 for the opening stand—second best in all India-Pakistan one-day internationals.

That super effort from the openers saw India overhaul the target with 10.3 overs to spare.

The Super four win is the second for India over their arch-rivals following their easy eighth wicket win in the first round. Bangladesh beat Afghanistan by three runs in a last ball finish in Abu Dhabi, which meant India sailed into the Sept. 28 final in Dubai.

Pakistan and Bangladesh meet in Abu Dhabi on Wednesday to decide the second finalist.

The win is India’s highest against Pakistan in terms of wickets, improving on the eight-wicket win over Pakistan in Melbourne in 1985.

Pakistan were steered to 237-7 by Shoaib Malik who made a 90-ball 78 after winning the toss and batting but it proved too little for the strong Indian batting line.

Pakistan could have got Sharma out in the sixth over but Imam-ul-Haq dropped an easy catch off a luckless Shaheen Shah, giving the colorful Indian power to smash seven boundaries and four sixes.

Sharma, who scored back to back fifties in the last two games, also became the ninth Indian batsmen to complete 7,000 one-day runs in his 187th match when he reached 94, soon after he was dropped on 81 by Fakhar Zaman off Shadab Khan.

Dhawan matched his skipper shot for shot, firing a 100-ball 114 with 16 boundaries and two sixes as Pakistani bowlers struggled with the rasping and flowing strokes of the Indian openers.

Pakistan’s pace spearhead Mohammad Amir, brought back in one of two changes after being dropped for the Afghanistan match, went wicketless for a fifth match in a row, leaving the much vaunted Pakistan bowling biteless. Even when Dhawan got out in the 34th over with 38 needed it was through a run out.

The best opening stand in Indo-Pak one-day internationals was 224 Mohammad Hafeez and Nasir Jamshed at Dhaka in 2012.

Indian captain Sharma was pleased with his team’s performance. “We asked for something like this from the boys,” said Sharma. “It was challenging conditions, and it was tough coming out and playing in these conditions. All of them showed great character, it’s a good win.”

Pakistan captain Sarfraz Ahmed said: “Tough game, we did well with the bat. If we keep dropping catches, we won’t win games. We’ve done hard work at fielding. So I’m not sure what’s going wrong.”

Earlier, Malik scored a 90-ball 78 with four boundaries and two sixes, but India kept a tight check on Pakistan’s progress.

Pakistan lost Imam (10), Zaman (31) and Babar Azam (run out for nine) in an unimpressive start to their innings before Malik and skipper Sarfraz Ahmed added 107 for the fourth wicket.

Sarfraz scored a slow 66-ball 44 with only two boundaries before he became one of two Kuldeep Yadav’s wicket who finished with 2-41.

Pakistan’s final over score depended on Malik, who crucially fell in the 44th over, caught behind off a leg-side edge off Jasprit Bumrah. Asif Ali smashed two sixes in his 21-ball 30 before he was bowled by leg-spinner Yuzvndra Chahal who took 2-38 in his nine overs.