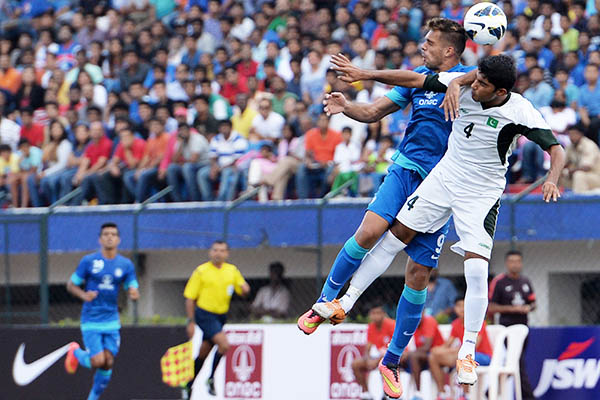 Pakistan’s coach says his team will prepare a strategy to counter the Indian side in the next match.

India defeated Pakistan 1-0 on Sunday in an emotionally charged opener to take the lead in a two-match football series, the first between the arch rivals for nine years.

The hosts hung on to their slender lead after captain Sunil Chhetri scored in the 44th minute in front of thousands of cheering home fans at the Bangalore Football Stadium. Match officials had initially awarded the goal to striker Robin Singh but changed their decision based on the referee’s report.

The Indians regrouped to launch a counter-attack after Pakistan dominated the proceedings in the first few minutes. “I am overall happy with the game. Pakistan started better but we took it over and had a lot of possession,” said India coach Wim Koevermans. “The atmosphere in the stadium was simply electric. This is what football is all about. It’s about the fans.”

Midfielder Pronoy Halder came close to scoring in the 16th minute, only to be thwarted by Pakistan goalkeeper Saqib Hanif. The hosts squandered at least three more scoring chances before Chhetri found success just a minute from the break.

Pakistan nearly equalized early in the second half, but keeper Amrinder Singh did well to stop captain Kalleemullah’s close-range header from going into the net. “Now that we have had a look at India, we will strategize accordingly [in the next game],” said Pakistan coach Muhammad Shamlan Al-Mubarak. “We need to recover fast … We are confident about a positive result.”

India was reduced to 10 men when Robin Singh received his second yellow card of the game. The star striker shook his head in disappointment as he walked off the field. Tempers became frayed on a number of occasions and angry words were exchanged, reflecting the high tensions associated with sporting clashes between India and Pakistan.

The football series is the first since India toured Pakistan in 2005 in a three-match contest. India suspended sporting ties with its neighbor in the aftermath of the deadly 2008 attacks on Mumbai, blamed on militants from Pakistan.

That deadlock hurt cricket the most, a game with which millions are obsessed on both sides of the border. The current football series offers the teams an opportunity to assess their strengths and weaknesses before the Asian Games in South Korea next month.

India have long struggled in world football and are currently ranked 150th out of 208 in the governing body FIFA’s rankings, while Pakistan are 164th. The second and final game will be played on Wednesday.