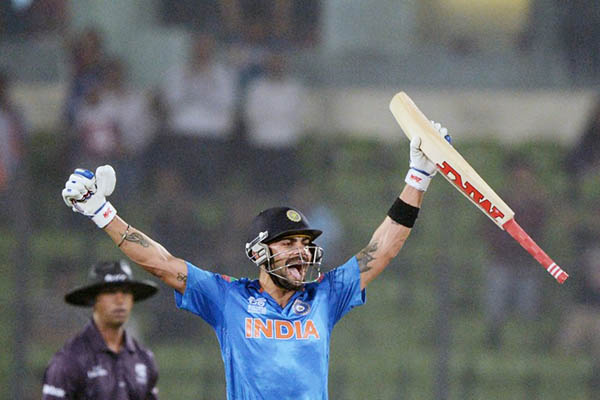 After electing to field first, the Indian side restricted their rivals to 130 runs and won with seven wickets to spare.

India defeated Pakistan by seven wickets in the Super-10 round of the World Twenty20 in Dhaka on Friday.

Leg-spinner Amit Mishra grabbed two wickets for 22 runs in four overs as India kept Pakistan down to 130-7 after electing to field first in the Group Two match at the Sher-e-Bangla stadium. Shikhar Dhawan and Rohit Sharma then gave India a flying start with a 54-run opening stand in eight overs as Mahendra Singh Dhoni’s men surpassed the modest total with nine deliveries to spare.

India slipped to 65-3 before Virat Kohli (36 not out) and Suresh Raina (35 not out) steered their team to victory with an unfinished partnership of 66 for the fourth wicket.

Pakistan, who have never beaten India in the 50-over World Cup or the World Twenty20, found runs hard to come by against the steady Indian attack led by Mishra and Ravindra Jadeja (one for 18).

Umar Akmal was Pakistan’s top scorer with 33 off 30 balls, but found little support at the other end as wickets fell at regular intervals on the slow pitch. Sohaib Maqsood delighted a sell-out crowd of 25,000 by smashing 15 runs in the final over bowled by Mohammed Shami, before being run out off the last ball.

Dhoni described the win as “fantastic” with good contributions from both batsmen and bowlers. “There were a few dropped catches and it would have been better if we had taken them,” he said. “But apart from that, it was a fantastic game. Rohit and Dhawan gave us a good start and Kohli and Raina capitalized on that. It is good to see Raina among the runs, because with him around it gives us the firepower in the middle order.”

Dhoni warned rivals that Mishra, who was included as the third spinner instead of playing an extra seamer, had yet to touch peak form. “I think Mishra bowled 70-75 percent of what he can bowl,” Dhoni said. “But we are not sure of playing three spinners every time. A lot will depend on whether there is evening dew or not.”

Pakistan captain Mohammad Hafeez stressed that one defeat did not signal the end of the tournament for his side. “The pitch was a bit damp due to the dew and the ball was not coming on to the bat. We were at least 20 runs short,” Hafeez said. “Then we dropped some catches, which we can’t afford in games like these. But there is a long way to go in this tournament and we will try to make a strong comeback.”

Defending champions West Indies, Australia and Bangladesh are the other three teams in the group, with the top two advancing to the semi-finals.