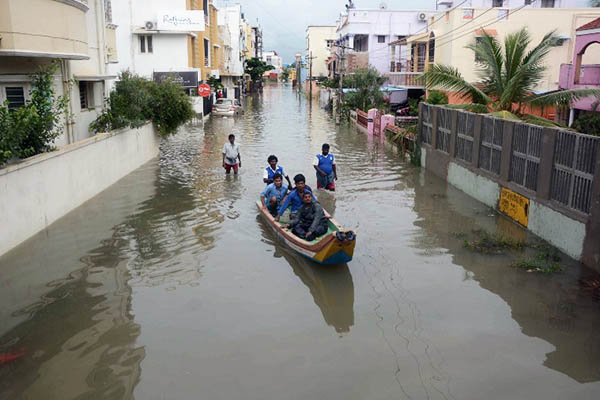 Government official says a relief fund of five billion rupees has been formed to deal with crisis.

India has deployed the army and air force to rescue flood-hit residents in the southern state of Tamil Nadu, where at least 71 people have died in around a week of torrential rains.

Media reports said military helicopters were being used to drop food and drinking water to the worst hit areas, while schools and businesses in state capital Chennai had been forced to close. Twelve children and 10 adults were airlifted to safety on Monday, the Press Trust of India (PTI) news agency quoted an official as saying.

PTI said at least 71 people had died since the rains started last week, with the neighboring states of Andhra Pradesh and Karnataka also affected. Television footage showed families in Chennai using canoes to get through waist-deep waters.

Tamil Nadu Chief Minister Jayalalithaa Jayaram said the government was “working day and night” to bring relief to victims of the floods, caused by a cyclonic depression formed in the Bay of Bengal. She announced a relief fund of five billion rupees, according to PTI.

India suffers severe flooding every year during the annual monsoon rains, which cover the subcontinent from June to September. Dozens died this year in flooding in the northeastern state of Assam.

The Indian Meteorological Department warned Tuesday of further heavy rain in the north of the state. Fishermen were advised not to put to sea along the coasts of Tamil Nadu and Pondicherry, it said in a bulletin.