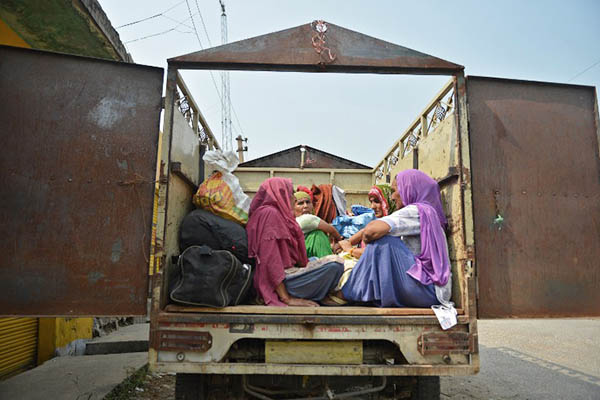 New Delhi’s move follows claims of ‘surgical’ strikes against militant compounds along the Line of Control.

India evacuated thousands of people living near the border with Pakistan on Friday, a day after carrying out strikes along the de facto frontier in disputed Kashmir that have dramatically escalated tensions between the nuclear-armed neighbors.

Authorities in parts of northern India said they were evacuating villages within 10 kilometers of the border following Thursday’s alleged raids, which provoked furious charges of “naked aggression” from Pakistan.

In Jammu and Kashmir state, police said more than 1,500 had moved away from areas where there was a risk of cross-border shelling, as fears of military escalation mounted. “Most women and children have fled the village and taken shelter here,” said one woman at a sports hall in Jammu’s Ranbir Singh Pora town. “Our men are staying back to take care of the cattle, but we are scared,” said the woman, who gave her name as Bibi.

Indian sources said Thursday that commandos had carried out “surgical strikes” several kilometers inside Pakistan-administered Kashmir on what they called “terrorist” targets. The move followed a deadly assault on one of India’s army bases in Kashmir that New Delhi blamed on Pakistan-based militants, triggering a public outcry and demands for military action.

Indian and Pakistani troops regularly exchange fire across the disputed border known as the Line of Control (LoC) in Kashmir, but sending ground troops over the line is rare. Islamabad has dismissed the talk of surgical strikes across the heavily militarized LoC as an “illusion” and said two of its soldiers had been killed in small arms fire.

Jaswant Kaur said people in his village of Chak Allah Baksh in Punjab had been told to leave their homes. “Of course it’s not a nice feeling to leave your home, crops, cattle and everything else behind,” the 55-year-old told AFP. “Living here means we are always on the edge. We are really distressed.”

Prime Minister Nawaz Sharif, facing international calls for restraint, told a cabinet meeting that Pakistan’s commitment to peace “must not be construed as weakness.”

The United Nations has said it is watching the situation “with great concern,” calling on India and Pakistan to exercise restraint, while Washington also called on both countries to improve communications to reduce tensions.

Pakistan’s foreign ministry said in a statement it had protested India’s “frivolous” surgical strikes claim to ambassadors from U.N. Security Council members China, France, Russia, the U.K. and the U.S. in Islamabad on Friday, calling on them to help ensure peace in the region.

India and Pakistan have fought three wars since they gained independence from Britain seven decades ago, two of them over the disputed Himalayan region of Kashmir.

Indian Prime Minister Narendra Modi raised hopes of a new era in relations with Islamabad when he paid a surprise Christmas Day visit to Sharif in December. But relations have unraveled in the nine months since, culminating in the Indian military’s alleged strikes this week.

On Tuesday New Delhi said it was pulling out of a key regional summit due to take place in Islamabad in November, citing an increase in cross-border attacks. Since then four other countries have pulled out of the November summit, forcing the host country on Friday to announce it was postponing the event in a humiliating blow.

India’s withdrawal came days after Modi warned Pakistan that India would push to make it a pariah state, accusing it of “exporting terrorism in all corners.”

Pakistan meanwhile said it had sent envoys to apprise the Chinese government of what it called the “deteriorating situation” in Jammu and Kashmir. Islamabad has repeatedly accused India of committing human rights abuses in its only Muslim-majority state, which has been roiled by deadly clashes between police and protesters since the death of a popular militant leader in July.

A number of armed separatist groups in the Indian-controlled part of the picturesque Himalayan territory have for decades been fighting to break free from New Delhi.