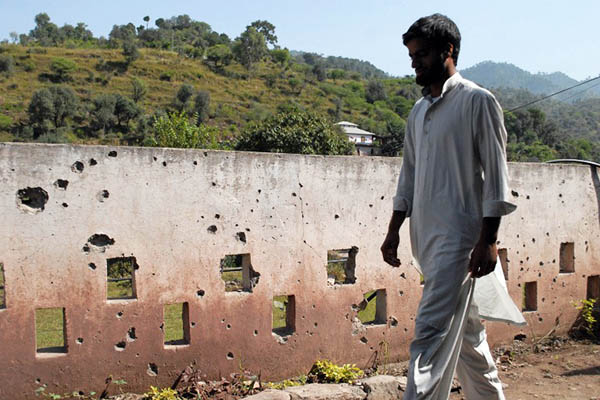 File photo of a resident of Pakistan-administered Kashmir walking past a shrapnel-marked wall. Sajjad Qayyum—AFP

India’s unprovoked firing on a wedding in Jigjot village along the Line of Control (LoC) on Sunday resulted in 11 civilians being wounded, according to a statement issued by the Inter-Services Public Relations.

The media wing of the Pakistan armed forces said that the Indian Army had used rockets and heavy mortars in its latest “unprovoked ceasefire violation,” adding that of the 11 civilians injured, 6 were women and 4 children.

“Indian Army resorted to unprovoked ceasefire violation in Khuiratta Sector along Line of Control targeting civil population during a marriage ceremony in Jigjot village with rockets and heavy mortars,” read the statement issued by the ISPR. “Deliberately targeting civil population particularly women and children reflects lack of morality, unprofessionalism and utter disregard of human rights by Indian army as well as violation of ceasefire understanding of 2003,” it added.

In a separate statement, the ISPR said that a Pakistan Army soldier had embraced martyrdom—and four militants killed—during an intelligence-based operation on a terrorist hideout near Kaitu River, North Waziristan.

“Security forces conducted IBO [intelligence-based operation] on a terrorist hideout near Kaitu River, northwest of Spinwam, North Wazirstan,” it said. “As soon as troops cordoned the area, terrorists opened fire to flee from the area,” it said, adding that all the terrorists had been killed in the exchange of fire.

“During intense exchange of fire, Sepoy Sadam, 27, resident of Karak, Khyber-Pakhtunkhwa, embraced shahadat while two soldiers got injured,” it added.