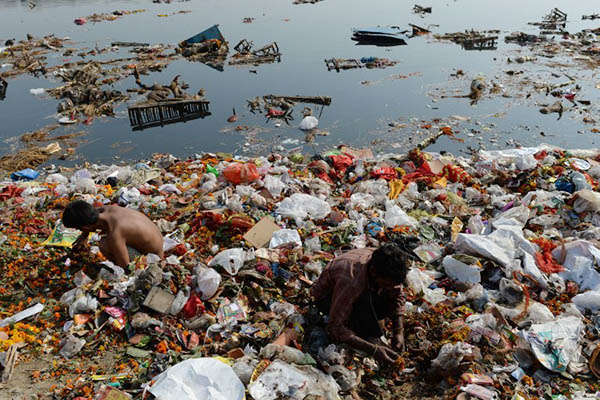 The polluted banks of the Yamuna river. Prakash Singh—AFP

Recognition of Ganges and Yamuna aims to help preserve and conserve the polluted waterways.

Two of India’s holiest but most polluted rivers have been recognized as a “legal person” in a landmark court ruling that could see the sacred waterways restored to health.

The decision to bestow legal standing to the Ganges and the Yamuna, one of its major tributaries, comes just days after New Zealand awarded similar rights to its own spiritual river in a move described as a world first. The highest court in Uttarakhand, the Himalayan state where the Ganges originates, late on Monday declared the rivers as “living entities having the status of a legal person” with all corresponding rights.

The state’s High Court in the resort town of Nainital said it took the unusual step because the hallowed rivers upon which Hindu rites are conducted were “losing their very existence.”

“This situation requires extraordinary measures to preserve and conserve these rivers,” the court said in its ruling.

The Ganges is India’s longest and holiest river, but the waters in which pilgrims ritualistically bathe and scatter the ashes of their dead is heavily polluted with untreated sewage and industrial waste. Prime Minister Narendra Modi campaigned in 2014 on a promise to revitalize the Ganges, even tasking a dedicated minister to the job, but results have been mixed three years on.

MC Pant, the lawyer who argued the case in Uttarakhand, said past court efforts to protect the river were done in the name of individual petitioners. “Now, they can be filed in the name of the river itself,” he told AFP.

Activists celebrated the groundbreaking ruling but cautioned against over-optimism given the scale of the task at hand. “At the end of the day, one can only hope the symbolism attached to this order translates into real action on the ground,” Sanjay Upadhyay, a New Delhi-based environment lawyer, told AFP.

New Zealand last week recognized its third-largest river, ancestral and spiritual waters for its Maori people, as a living entity. Successive governments in India have attempted with limited success to clean up the Ganges, which snakes 2,500 kilometers across northern India from the Himalayas to the Bay of Bengal.