Home Latest News India Lashes Out at Pakistan at U.N.

India Lashes Out at Pakistan at U.N. 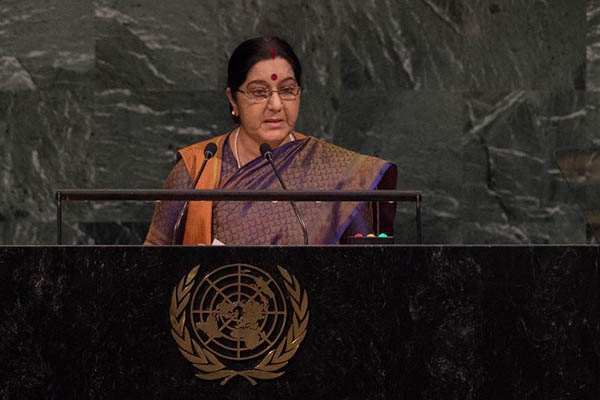 India’s foreign minister took a swipe at Pakistan on Saturday, telling the United Nations that its neighbor had given the world “terrorists” while India was producing top-notch doctors and engineers.

“Why is it today India is a recognized IT superpower in the world, and Pakistan is recognized only as the pre-eminent export factory for terror?” Sushma Swaraj told the General Assembly. “We produced scholars, doctors, engineers. What have you produced? You have produced terrorists,” she said.

Swaraj offered a response to an address earlier in the week by Prime Minister Shahid Khaqan Abbasi who at the U.N. podium accused India of “massive and indiscriminate force” in Kashmir.

Relations between India and Pakistan have been tense in recent times, mainly over Kashmir, which is divided but claimed by both countries in full. The two nations have fought three wars since gaining independence from Britain in 1947, two of them over the disputed Himalayan territory.

Following Abbasi’s speech on Thursday, an Indian diplomat took to the floor of the General Assembly in a reply and branded the country “Terroristan.”

India accuses Islamabad of training, arming and infiltrating militants into Kashmir, a claim that Pakistan has denied. On Friday, the Pakistani military said six people were killed and over two-dozen wounded in firing by Indian troops near the Kashmir border.