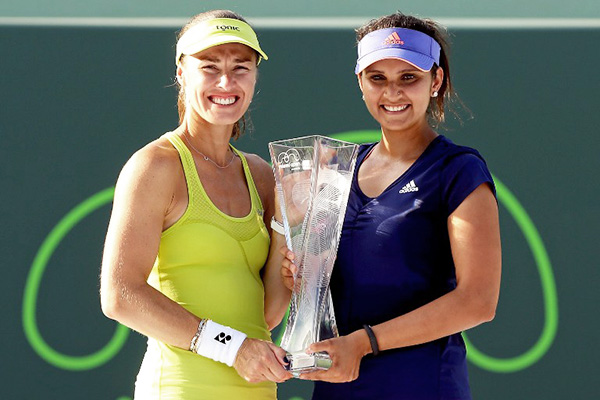 Prime Minister Narendra Modi on Monday led the accolades for Sania Mirza after she became the first Indian woman to be crowned the world’s top-ranked doubles tennis player.

“An excellent accomplishment @MirzaSania! Congrats on being World Number 1 in doubles,” Modi, currently on a three-nation European tour, tweeted to his 11.6 million followers.

Mirza, 28, climbed to the top of the rankings after she won the Family Circle doubles title in Charleston, United States, on Sunday while partnering Swiss great Martina Hingis. It was the third successive title for the duo, also the number one doubles pair, after their victories in the hard court events in Indian Wells and Miami.

Messages also poured in from cricket great Sachin Tendulkar, current Test captain Virat Kohli and badminton star Saina Nehwal, who had briefly ranked as the number one singles player earlier this month. “Congratulations to @MirzaSania on being crowned World No. 1 in doubles. Terrific achievement and will inspire more to pursue the sport,” Tendulkar tweeted.

Kohli wrote on his Twitter page: “First Saina and now @MirzaSania. Indian women conquering the No. 1 spot and making us proud! Congratulations!”

Mirza was once ranked in the top 30 in singles before a string of injuries made her take up doubles as a full-time career. She said she hoped her rise to the top would inspire women to believe in themselves. “I hope this makes girls in India believe that anything is possible; we can achieve anything we want if we put our mind and body to it,” she said in a statement. “I feel extremely honored to be No.1. It’s something that I’ve worked for all my life.”

Mirza has been a trailblazer for women’s tennis in India, despite being hounded by controversy throughout her career. She even faced a fatwa for wearing short skirts on court.

Last year a member of Modi’s Hindu nationalist BJP party in her home state of Andhra Pradesh called Mirza a “daughter-in-law of Pakistan” because of her marriage to Pakistani cricketer Shoaib Malik.

Modi had to step in to defuse the situation, inviting a furious Mirza for tea in New Delhi.

Only three other Asian women have achieved the top WTA doubles ranking: Japan’s Ai Sugiyama, China’s Peng Shuai and Taiwan’s Hsieh Su-wei. The doubles pair of Leander Paes and Mahesh Bhupathi are the only other Indians to achieve number one rankings in tennis.