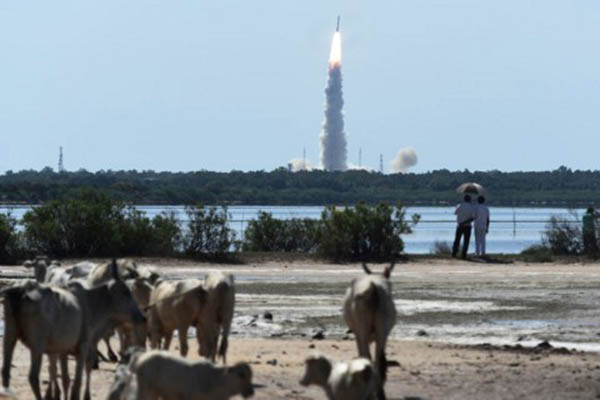 The rocket blasted off from the southern spaceport of Sriharikota carrying satellites from the U.S., Germany, Canada and Indonesia, the most in a single Indian mission. Most of the satellites will enter orbit to observe and measure the Earth’s atmosphere, while another aims to provide service for amateur radio operators.

“Each of these small objects that you are putting into space will carry out their own activity, which is independent of the other, and each of them will live a wonderful life for a finite period,” Indian Space Research Organization (ISRO) chairman A. S. Kiran Kumar told the NDTV news network.

The business of putting commercial satellites into space for a fee is growing as phone, Internet and other companies as well as countries seek greater and more high-tech communications. India is competing with other international players for a greater share of that launch market, and is known for its low-cost space program.

Among the 20 satellites launched on Wednesday were 13 from the U.S. including one from a Google-owned company and two from Indian universities.

Prime Minister Narendra Modi hailed the 20-satellite record as a “monumental accomplishment,” although it trails Russia’s 33 record launched in 2014 and NASA’s haul of 29 the year before.

“Our space program has time and again shown the transformative potential of science & technology in people’s lives,” Modi tweeted.

Last month India successfully launched its first mini space shuttle as it joined the global race to make reusable rockets. The shuttle was reportedly developed on a budget of just one billion rupees, a fraction of the billions of dollars spent by other nations’ space programs.

India in 2013 sent an unmanned rocket to orbit Mars at a cost of just $73 million, compared with NASA’s Maven Mars mission which had a $671 million price tag. The successful mission was a source of immense pride in India, which beat rival China in becoming the first Asian country to reach the Red Planet.

Modi has often hailed India’s budget space technology, quipping in 2014 that a local rocket that launched four foreign satellites into orbit had cost less to make than Hollywood film Gravity.