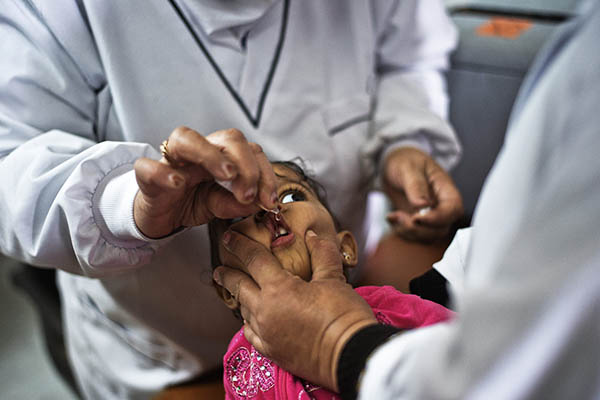 Strain found in Telangana state had not been seen in India for 17 years.

Two years after it was declared polio free, India said Wednesday it was launching an emergency vaccination drive after discovering a strain of the disease that is not covered by its existing inoculations.

Although no actual case of the disease has been detected, health officials said they would vaccinate hundreds of thousands of children living in the southern state where the variety of the virus was found in a sewer during routine checks. The strain had not been seen in India for 17 years and the vaccines are being flown in from Geneva as they are not available locally in sufficient quantities.

G. Srinivasa Rao, a health official in southern Telangana state, said the type of polio discovered likely originated in a virus contained in an oral vaccine and mutated after it was given to a child with a weak immune system. “Most likely a child released it through stool who must have been vaccinated a year ago. Such rare cases happen in children with low immunity,” he said.

Rao said more than 320,000 under-fives would be vaccinated in two districts of the state to conform with World Health Organization (WHO) protocol. India’s health ministry said the discovery would not affect India’s polio-free status.

“The special immunization campaign will ensure all vulnerable children living in high-risk areas are given protection against polio,” it said.

The WHO declared India polio-free in 2014, three years after its last case of the disease, hailing the achievement as a “momentous victory.” But India faces a perpetual threat from the virus as it is endemic in neighboring Pakistan and Afghanistan.

Polio spreads through fecal matter, attacks the central nervous system and can leave its victims crippled or dead.