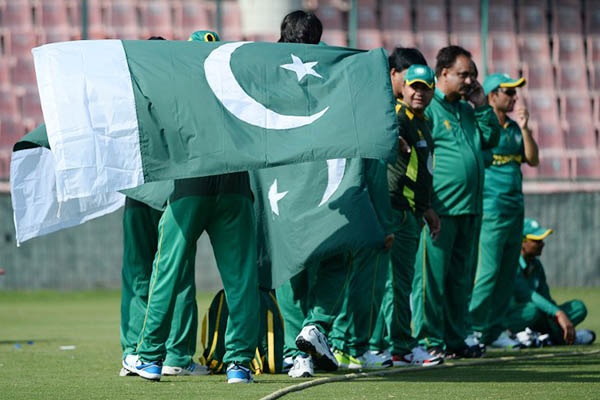 The bowlers bowled underarm and the batsmen played only sweep shots but the highly charged atmosphere at the World T20 for the blind on Wednesday was otherwise typical of any contest between India and Pakistan.

The players wore their hearts on their sleeves—fervently shouting out to each other to take the odd catch or stop the ball from hitting the boundary at New Delhi’s Feroz Shah Kotla ground.

The white rattle ball barely rose up to their ankles but the Indian batsmen scored freely, much to the delight of the mostly blind spectators who followed the ball-by-ball commentary via loudspeaker. But their joy proved short-lived as the hosts lost the group stage match by seven wickets despite making a competitive 240-4 off 20 overs after opting to bat first.

Showdowns between India and Pakistan’s national cricketers usually draw hundreds of millions of television viewers, making it the biggest box office attraction in the sport. But diplomatic tensions have meant that the two teams have not played any bilateral series for nearly four years and their rivalry is therefore restricted to multi-national tournaments.

“The fact that you are playing in India at a time when the situation is tense and the national teams are not engaging bilaterally makes this tournament special,” said Syed Sultan Shah, chairman of the Pakistan Blind Cricket Council.

“Blind cricketers are sending out a message to the entire world that it is important to engage in sporting activities if you have to promote peace and brotherhood,” said Shah who is visually impaired himself.

While Pakistan’s blind players enjoy the patronage of their national board, their Indian counterparts are yet to be recognized by the Board of Control for Cricket in India (BCCI), the wealthiest such body in the world.

This was the one grouse Indian captain Ajay Reddy had as he watched his wards take a sharp single just as the ball raced towards the boundary, brought closer by almost 25 yards. “Pakistan players come under the aegis of Pakistan Cricket Board. They are giving salaries to the players but we not getting anything,” Reddy told AFP. “If our financial issues get solved, we will be able to perform even better. We are only playing because we love cricket and we have a lot of passion for the game even though we are blind.”

The final will be in Bangalore on Feb. 12.