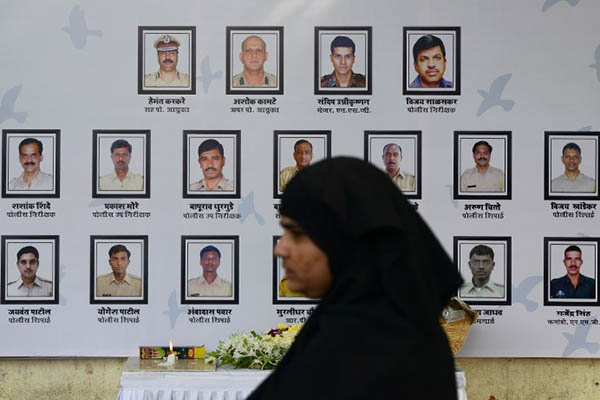 India on Monday marked the 10th anniversary of the Mumbai terror attacks with ceremonies at sites across the city that became battlegrounds in the wave of violence that killed scores and dealt a critical blow to relations with neighboring Pakistan.

Ten years on, the United States offered a new $5 million reward for the capture of the remaining attackers and called on Islamabad to cooperate with the hunt for the planners of the assault.

While Mumbai staged its own solemn ceremonies, Prime Minister Narendra Modi called the attacks “gruesome” and said: “A grateful nation bows to our brave police and security forces who valiantly fought the terrorists during the Mumbai attacks.”

Played out on TV news channels around the world, the bloody events—widely known as 26/11—have been compared in India to New York’s suffering on Sept. 11, 2001.

The coordinated attacks on the city of nearly 20 million people hit luxury hotels, the main railway station, a restaurant popular with tourists and a Jewish center.

Mumbai’s police remembered more than a dozen officers killed in the operation against the militants while relatives of the victims laid wreaths at a police memorial honoring the dead.

Residents were also to pay respects at Chhatrapati Shivaji Terminus railway station where Mohammed Kasab, the only gunman caught alive, and another attacker killed almost 60 people and wounded at least 100 others.

The Taj Mahal Palace and Tower Hotel will hold a private service to remember the 31 people who died there.

Dramatic scenes of Indian commandos battling the heavily armed gunmen, and guests tried to escape from windows down bed-sheet ropes were beamed around the world on live television.

Indian security forces only retook control of the hotel on the morning of Nov. 29.

More than 30 people also died at the Oberoi and Trident hotels in a 42-hour siege involving shootings, explosions and hostage-taking. Six hostages—including a rabbi and his pregnant wife—were killed at Nariman House, a Jewish cultural and religious center.

The current rabbi is to unveil a new memorial at the center to all those who died in the 26/11 attacks.

Mohammad Ajmal Amir Kasab, the gunman caught at the railway station, was executed by India in 2012 after being found guilty of charges including murder and waging war against India. Taiba called Kasab “a hero” in a comment that highlighted the deep-rooted rivalry between India and Pakistan since their division in 1947.

Indian politicians and officials routinely condemn Pakistan for not taking action against Taiba leader Hafez Saeed who remains free even though he is designated a terrorist by the United Nations. Pakistan says that evidence provided by India against Saeed is too vague.

Six Americans were among the Mumbai victims and the U.S. State Department announced a $5 million prize for the capture of the remaining planners of the attacks.

The United States already has a $10 million bounty offered for Saeed and $2 million for Hafiz Abdul Rahman Makki, another senior group leader. “It is an affront to the families of the victims that, after 10 years, those who planned the Mumbai attack have still not been convicted for their involvement,” U.S. Secretary of State Mike Pompeo said in a statement. “We call upon all countries, particularly Pakistan, to uphold their U.N. Security Council obligations to implement sanctions against the terrorists responsible for this atrocity, including Lashkar-e-Tayyiba and its affiliates.”