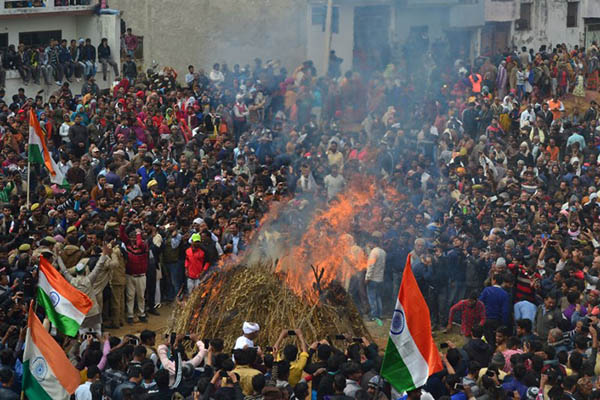 Thousands of mourners across India attended funerals on Saturday for some of the 41 soldiers killed in a suicide bombing in India-occupied Kashmir as a round-the-clock curfew remained in force in part of the restive region.

The paramilitary troops were killed on Thursday as explosives packed in a van ripped through a convoy transporting 2,500 soldiers in the disputed Himalayan region, the deadliest attack in a three-decade-old armed conflict.

TV stations showed coffins wrapped in Indian flags being carried by thousands of people across their hometowns, such as Gaya in the east and Unnao in the north, after the bodies were flown to New Delhi late Friday where Prime Minister Narendra Modi laid a wreath.

India has accused Pakistan of harboring the militants behind the attack, which has sparked nationwide outrage and some public calls for war against the neighboring nation to avenge the killings.

Kashmir has been split between India and Pakistan since independence from Britain in 1947, with both the countries, which have fought three wars, claiming it in its entirety. Two buses of the Central Reserve Police Force (CRPF) in the 78-vehicle convoy were targeted by the bomber on a key highway in the Pulwama district, just outside the main city of Srinagar.

The powerful blast reduced one of the buses to a heap of mangled debris. Pictures showed bodies and body parts strewn all over the highway.

“I feel proud of the martyrdom of my son. I expect the government of India to avenge the killings,” Brish Soreng, father of one of the soldiers, told reporters.

Modi on Friday warned that those responsible had made a “big mistake” and would pay a “very heavy price.”

India is garnering diplomatic support after the attack and has vowed to “isolate” Pakistan diplomatically in the international community, saying it has “incontrovertible evidence” of Islamabad’s role. Pakistan has rejected the allegations.

U.S. National Security Adviser John Bolton called his Indian counterpart Ajit Doval, promising to work with India to “ensure that Pakistan cease to be a safe haven for JeM and terrorist groups that target India, the U.S. and others in the region,” according to a readout released by India’s foreign ministry on Saturday.

Angry street protests were held across many Indian cities on Friday and residents held candlelight vigils to pay tribute to the dead. A round-the-clock curfew was imposed in India-occupied Kashmir’s Jammu city, in the Hindu-majority part of the region, after mobs attacked Muslim properties and set fire to vehicles during a protest against the attack.

At least 12 people were injured, local media reported, and internet access in the area was suspended.

The attack has put Modi’s Hindu nationalist Bharatiya Janata Party (BJP) on the back foot ahead of national elections due by May. Modi’s government in recent years has adopted a muscular policy in Kashmir and shelved dialogue with Pakistan to boost its popularity after accusing the previous government of being soft on militancy.

“Revenge is the only word that comes to my Mind,” tweeted Babul Supriyo, a minister in Modi’s government.

A meeting of political parties in New Delhi on Saturday extended full support to the government in “fighting terrorism, defending India’s unity and integrity.”

In 2016, New Delhi allegedly launched a “surgical strike” in Pakistan-administered Kashmir after militants attacked a military base, killing 19 soldiers. India claimed special commandoes went several miles into the Pakistan-controlled side across the heavily-militarized Line of Control, the de facto border, killing and destroying militant facilities.

India has some 500,000 troops in the region, making it the most militarized zone in the world, after an armed rebellion began in 1989. Tens of thousands of people have died in the conflict with most casualties civilians. Last year was the deadliest in a decade with almost 600 killed.

The separatist rebels are fighting for the independence of all of Kashmir, while some want it to become a part of Pakistan.