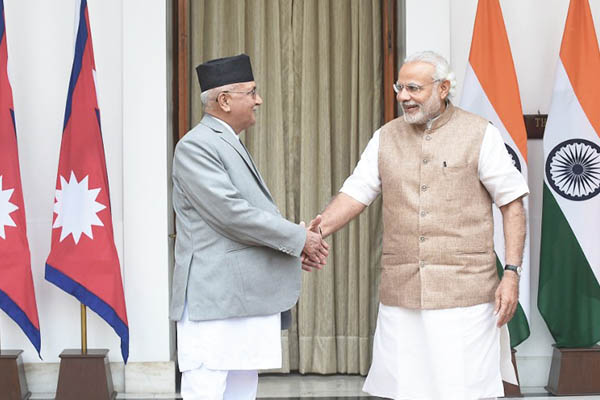 The two countries also signed nine agreements including a $250 million grant for reconstruction following a devastating quake last year and memoranda of understanding to improve Nepal’s roads and power infrastructure.

“The main reason for my visit is to clear the misunderstandings between India and Nepal that have settled in last few months,” Oli, who arrived in Delhi on Friday for a six-day visit, said at a joint press conference.

Protests by Nepal’s Madhesi ethnic minority began in September over a new constitution, which they said left them politically marginalized, with more than 50 people dying in clashes with police.

Kathmandu accused India of imposing an “unofficial blockade” on the landlocked nation in support of the Madhesis, who share close cultural, linguistic and family links with Indians across the border.

India denied backing the protesters, who lifted a blockade on a key checkpoint earlier this month, and has urged Nepal to hold talks with Madhesis to resolve the political differences.

“I am confident you will take Nepal on the path of peace and stability by resolving all constitutional issues on the basis of these principles, through political dialogue and by taking along all sections of Nepal,” the premier told reporters.

Nepal’s new constitution, the first drawn up by elected representatives, was meant to cement peace and bolster Nepal’s transformation to a democratic republic after decades of political instability and a 10-year Maoist insurgency. But ongoing discussions between the government and protesting parties over the charter have failed to yield an agreement.

Nepal on Thursday announced plans to establish a committee to review disputed provisions within the constitution. The unrest led Oli, who was elected in October, to put off his visit to India, a traditional first stop for Nepali prime ministers heading overseas. The small country is heavily dependent on India for fuel and other supplies.