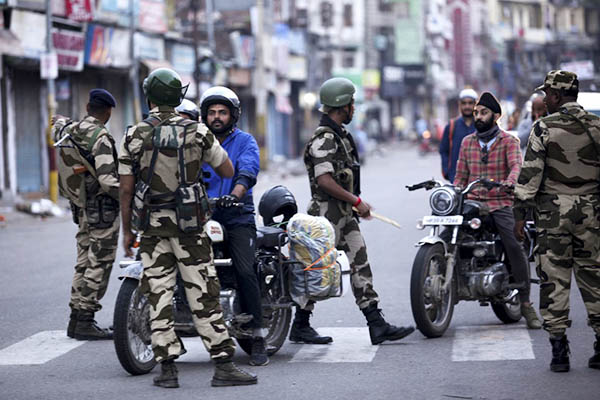 Security personnel question motorists on a street in Jammu on Aug. 5, 2019. Rakesh Bakshi—AFP

Authorities in India-Occupied Kashmir placed large parts of the disputed region under lockdown early on Monday amid a massive troop buildup by New Delhi, which traded accusations of clashes with Islamabad at the de facto border.

The recent tensions started in the last 10 days after New Delhi deployed at least 10,000 troops, but a security source told AFP a further 70,000 had been dispatched in what is believed to be an unprecedented level. “As per the order there shall be no movement of public and all educational institutions shall also remain closed,” the state government ordered for Srinagar, the capital of India-Occupied Kashmir, and surrounding areas, in a statement obtained by AFP.

“There will be a complete bar on holding any kind of public meetings or rallies during the period of operation of this order.”

Universities, schools and colleges in the Hindu-dominated Jammu were ordered to be shut, and one district in that region was placed under lockdown. Several other major districts of the Muslim-majority state were also placed under restrictions, local media reported.

Private mobile networks, internet services and telephone landlines were cut, with only the one government-owned mobile network remained operational, an AFP reporter said. A senior official told AFP nearly 300 administrative officials and top security officials had been issued with satellite phones. Before the networks were cut, senior former and current Kashmiri politician leaders tweeted that they had been put under house arrest.

“I believe I’m being placed under house arrest from midnight tonight & the process has already started for other mainstream leaders,” Omar Abdullah, a former chief minister of Jammu and Kashmir, tweeted.

In downtown Srinagar, a local resident told AFP government forces threw “chili bombs” that affect respiratory systems, on empty streets. The last time similar restrictions were imposed in the territory was in 2016 after the killing of a popular rebel leader, which sparked months of violent street protests that left nearly 100 dead.