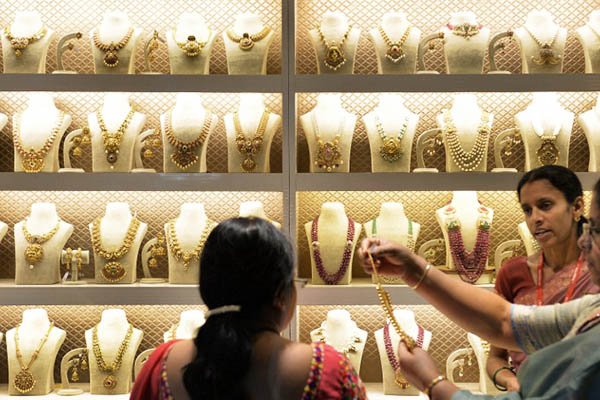 China lost its place to India as the world’s biggest gold consumer in 2014, sector data showed Thursday, hit by collapsing jewelry demand after one year in the top spot.

That marked the lowest overall level in five years and was also the third successive annual decline for the precious metal, whose two main drivers are jewelry and investment buying. World jewelry demand sank 10 percent to 2,153 tons last year, while China registered a 33-percent slump to 814 tons, according to the council representing leading gold producers.

However, India experienced an exceptional year for jewelry. “India … had its strongest year for jewelry demand since the WGC’s records began in 1995, up 8.0 percent on a year ago to 662 tons,” the organization added. “This was driven by wedding and festival buying despite the presence of government restrictions on gold imports for most of the year.”

India had imposed gold import curbs in 2013 in order to avert a trade deficit crisis that pushed the rupee to record lows. However, it eased those restrictions last November. “2014 was a year of stabilization and innovation in the gold market, with annual gold demand down by just 4.0 percent after the record-breaking level of buying seen in 2013,” added Marcus Grubb, the group’s managing director of investment strategy.

“It was a standout year for Indian jewelry, despite government restrictions on gold imports, reinforcing the nation’s affinity with gold. Meanwhile Chinese gold demand returned to those last seen in 2011/2012 as consumers and investors took time to digest the substantial volumes accumulated in 2013.”

The London-based WGC added that the year ended strongly in the fourth quarter, boosted by jewelry demand and central bank buying. Central banks bought 477 tons of gold last year, up 17 percent from 409 tons in 2013, according to the WGC. That marked the fifth consecutive year where central banks were net purchasers of gold.