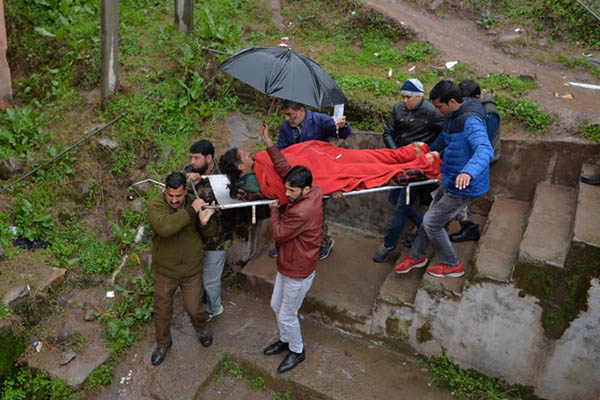 Tensions between India and Pakistan raged on Saturday as heavy firing by their armies killed at least seven people on either side of their fiercely disputed Kashmir border.

The nuclear-armed rivals fired mortars and artillery at each other despite the release of an Indian pilot who had been shot down by Pakistan but then sent back as a “goodwill gesture.”

In a fearsome 24-hour spell, two soldiers and two civilians died on the Pakistan side, its military said. On the Indian side, a woman and her two children died after their house was pulverized by a mortar shell.

Indian army chief Bipin Rawat dashed to Udhampur in his country’s sector of Kashmir on Saturday to review border security. Across the region villagers huddled in makeshift bunkers while police ordered non-essential traffic off roads, a reporter said.

At least 12 civilians have been killed on either side of the frontier since the start of the week.

The release of Wing Commander Abhinandan Varthaman to Indian authorities late Friday following 60 hours in Pakistani custody boosted hopes of a de-escalation. But a furious backlash erupted in India over a video in which Abhinandan can be seen praising his captors and criticizing Indian media.

Abhinandan was shot down in his MiG fighter on Wednesday as he chased Pakistani jets over disputed Kashmir. His capture had become the centerpiece of hostilities between the arch-rivals after a Feb. 14 suicide bombing in Kashmir killed 40 Indian paramilitaries.

Abhinandan, who ejected to safety but was set upon by a crowd on the Pakistani side of the Kashmir ceasefire line, had a noticeable black eye when he returned and was immediately taken for a medical checkup before a debriefing by military and intelligence agencies. Media reports said Abhinandan’s return was held up because he was forced to make the video before being freed.

In the heavily edited video distributed by the Pakistani military just before his release, he praised the professionalism of the Pakistan Army and criticized Indian media for creating war hysteria.

Omar Abdullah, a former chief minister of Jammu and Kashmir state, said the video tainted Pakistan’s gesture to return the pilot so quickly. “Sadly the image you paint for us is marred terribly by the video he’s forced to record just before you sent him back,” Abdullah said on Twitter. “That high moral ground you had bequeathed to yourselves slipped at the end.”

India’s feverish social media also slammed the video, which was tweeted by the Pakistan government but later taken off its official account.

There was no let-up in war rhetoric with Indian Prime Minister Narendra Modi saying no one could “dare threaten” a “new, fearless and decisive” India. Modi also told an India Today media group conference the country needed the Rafale fighter jets it wants to buy from France. The deal has been embroiled in corruption allegations leveled by the opposition Congress party.

“If India had the procured the Rafale on time then the result of the recent skirmish with Pakistan could have been different,” Modi said.

In a bid to defuse the tensions, Adel al-Jubeir, minister of state for foreign affairs for Saudi Arabia, a key Pakistan ally, was to arrive in Islamabad on Sunday, underlining global concern over the showdown. Saudi Arabia has offered to help to end the new hostilities.

“He is visiting us and and will also visit India. He is our friend and we have historical relations with them [Saudi Arabia],” Pakistan’s foreign minister Shah Mehmood Qureshi told reporters.

Pakistani media praised the government for releasing the pilot but some social media users criticized the military video, calling it “cheap” and “unnecessary.”

Abhinandan was captured a day after Indian planes bombed what New Delhi said was a militant camp in Pakistan, in retaliation for the Kashmir suicide bombing claimed by a Pakistan-based militant group.

Kashmir has been divided between the two countries since their independence and bitter split in 1947. It has been at the center of two of their three wars since then.