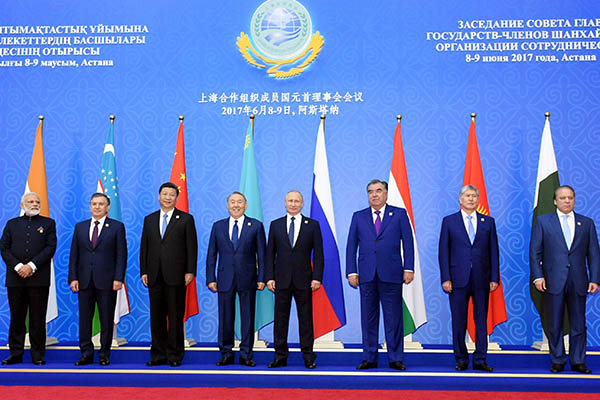 Leaders of the largely symbolic body—including Russia’s Vladimir Putin and China’s Xi Jinping—formally signed off on the subcontinent duo’s accession at the annual SCO summit in Kazakhstan’s capital Astana.

Prime Minister Nawaz Sharif and Indian counterpart Narendra Modi reportedly shook hands and exchanged greetings late Thursday at the opening of the SCO meeting, although New Delhi said that no formal bilateral meeting between the two was planned. Modi on Friday hailed India’s accession as a “landmark moment in the journey of the SCO” and pledged India would play a “constructive and active role” in the organization that also includes ex-Soviet states Kyrgyzstan, Kazakhstan Tajikistan and Uzbekistan.

Sharif thanked the founding members for their “staunch support” for his country’s entry into the organization, which he hailed as “an anchor of stability in the region.”

Kashmir has been divided between India and Pakistan since the end of British colonial rule in 1947. Both claim the territory in its entirety. India regularly accuses Pakistan of arming militants, while Islamabad denies the allegation, saying it only provides diplomatic support to Kashmiris seeking self-determination.

But both Moscow and Beijing expressed optimism that the two neighbors’ entry into the SCO could strengthen prospects for peace across the region.

Founded in 1996, the SCO is viewed as a vehicle for managing competing Chinese and Russia political, economic and military interests in the strategic region. China is championing ambitious infrastructure projects, including land and sea links touted as a revival of the ancient Silk Road trade route. Russia, in turn, has focused on broadening its Eurasian Economic Union integration project involving former Soviet allies.