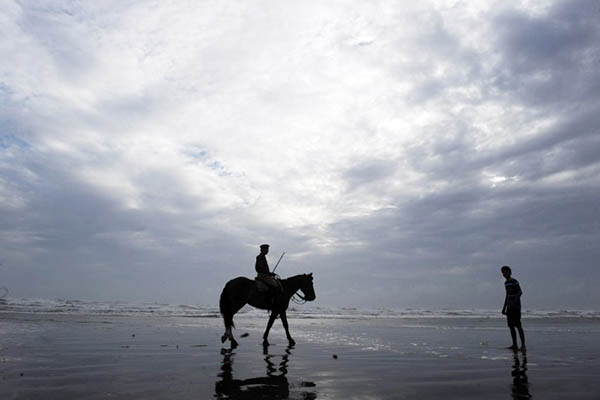 Meteorologists expect storm to weaken before landfall, but are readying for the worst.

Officials were preparing on Monday for another “very severe cyclonic storm” due to slam into India’s west coast and Pakistan.

Cyclone Nilofar, building in the Arabian Sea, is due to hit India’s Gujarat state and Pakistan’s southern coastal areas on Friday morning, the Indian Meterological Department said. “Our taluka [district] level officers have been sent to villages in the coastal areas to identify the population that is to be relocated,” said M. S. Patel, an official from Gujarat’s Kutch district that is expected to bear the brunt of the storm. “We will start shifting people in the coastal regions from tomorrow morning,” he added.

India’s National Disaster Response Force has been put on alert in Gujarat, while the state government was set to hold an emergency planning meeting later Monday, officials said. The storm, packing winds of up to 125 kilometers per hour, comes after Cyclone HudHud hit India’s east coast earlier this month leaving some 20 people dead. The tail end of that cyclone also swept into neighboring Nepal causing Himalayan snowstorms that claimed more than 40 lives in the country’s worst trekking disaster.

In Pakistan, officials were on alert in case the storm turned toward Sindh province and Karachi, the country’s biggest city of more than 18 million people.

The National Disaster Management Authority (NDMA) has warned local agencies to take precautionary measures ahead of the cyclone. Fishermen have been advised not to venture into the open sea from Wednesday to Friday, and those already at sea have been told to come back to shore.

“We have instructed our provincial chapter to warn fishermen that they should refrain from fishing in the sea for few coming days,” said NDMA spokesman Ahmed Kamal.

Weather officials in both countries said the cyclone might weaken before it hits land, though it could still bring strong gusty winds and rains. “It would become quite weaker when it would hit ours and Indian coastal areas,” Pakistan’s chief meteorologist Touseef Alam said. “But strong gusty winds and modest to heavy rains with thunderstorm are expected.”

India has six categories of tropical storms based on wind speeds and damage expected, with Nilofar falling into category five, the second from top. Cyclone Phailin, which struck India last October, had winds of up to 220 kph and caused extensive damage.

India, particularly its east coast, and neighboring Bangladesh are routinely hit by bad storms between April and November that cause deaths and widespread damage to property.