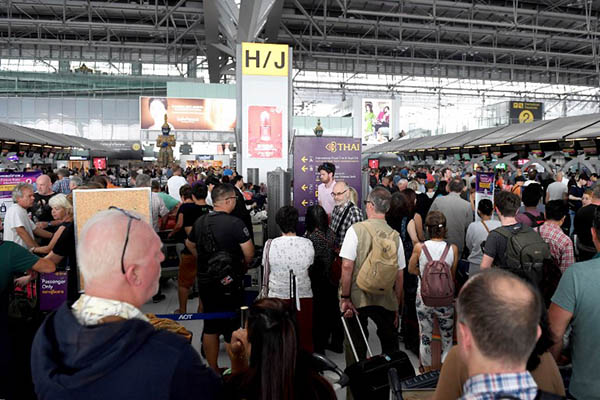 Thousands of air travelers worldwide were left stranded on Thursday after Pakistan closed its airspace in response to escalating tensions with India.

Thai Airways has cancelled nearly 30 flights, affecting 5,000 passengers. “All THAI flights from Bangkok to Europe departing near midnight of 27 FEB through early 28 FEB and from Europe to Bangkok departing on 27 FEB have been cancelled due to Pakistan airspace closure,” the airline wrote on its Twitter page.

The decision affected services to London, Munich, Paris, Brussels, Milan, Vienna, Stockholm, Zurich, Copenhagen and Oslo, but the airline said at around 0530 GMT that it was resuming normal operations to Europe.

Singapore Airlines was also forced to divert Europe-bound flights to Mumbai and Dubai to refuel, while a flight to Frankfurt was cancelled.

The crisis between nuclear-armed neighbors Pakistan and India had raised fears of an all-out war. But Pakistan said it would release a captured Indian pilot on Friday, in an overture towards New Delhi. India earlier said its forces had also shot down a Pakistani fighter jet—a claim denied by Islamabad—as Pakistan suddenly closed its airspace early Wednesday.

In Russia, two flights from Moscow to Vietnam and Saint Petersburg to Thailand had to turn back while a Bangkok-bound flight was forced to land in Uzbekistan.

Air Canada suspended flights to Mumbai and New Delhi, diverting an India-bound flight back to Toronto, while seven services from Istanbul to Pakistan were cancelled.

Pakistan International Airlines (PIA) also cancelled services to and from Britain, Spain, Italy and Canada as the airspace closure was extended into Friday.

Thai Airways flights to Scandinavia and a PIA flight to Copenhagen were also affected, with local television station TV2 television reporting that 25 Danish students were stuck at Bangkok airport. “The atmosphere is not very good right now. We try to keep up the morale, but it’s difficult,” said student Sara Bjerregaard Larsen, adding that many were in tears.

Thai Airways struggled to find new routes to Europe with Iran “rejecting” a request to travel over its airspace, according to a spokesperson for the carrier. But a few hours later China gave “permission to Thai Airways… to bypass Pakistani airspace,” according to Pratana Patanasiri, Thai Airways Vice President, allowing Thursday night’s flights to Europe to resume.

Frustration meanwhile mounted on Thursday at Bangkok’s main airport. “We have waited here for 11 or 12 hours already,” said Gerda Heinzel 55, a German tourist returning to Munich after a holiday in Phuket. “We have not been given anything to eat, anywhere to stay. There are no German-speaking staff to help us.”

The airline said in a Facebook statement that refreshments were available and that it would “take care of expenses incurred.”

“Passengers who were booked to travel on the affected routes may change their itineraries without any fees and charges, and conditions apply,” it added.