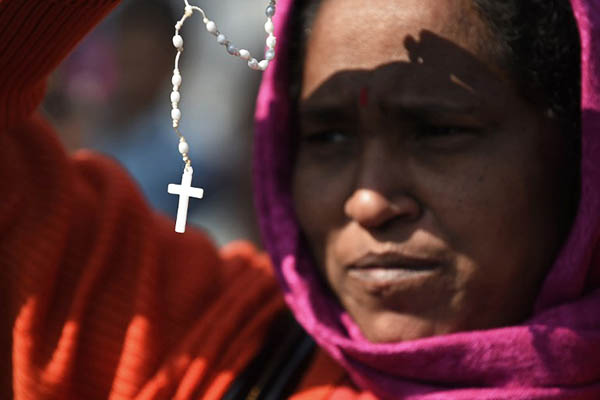 Vandals who attacked a northern Indian church wrapped a dog chain around the neck of a Virgin Mary statue, police said Thursday, in the latest assault on Christian places of worship in Hindu-majority India.

Police said several statues were damaged and their glass cases broken inside the grounds of St. Mary’s church in the overnight attack in the tourist city of Agra, home to the famed Taj Mahal.

“We have filed a case against unknown men and investigations have been started,” said Aseem Chaudhary, officer in charge of Rakabgunj area of the city. “It seems someone with a sick mentality has carried out the attack,” he said.

A string of churches and a school have been attacked in recent months, heightening existing tensions over religious freedom in India. In February, an elderly nun was raped at a convent school in West Bengal, triggering protests across the country.

Parish priest Moon Lazarus expressed concern over the latest attack, saying “tying a dog chain around the idol is an attack on our religious sentiments.” He said a group tried to break into the main church building but escaped after setting off a car alarm outside.

“I heard the car alarm and quickly came out to see. They jumped over the church wall and escaped,” Lazarus said.

Prime Minister Narendra Modi pledged in February to crack down on religious violence and ensure freedom of worship for all faiths, after being heavily criticized for not speaking out earlier.

Priests and other Christian leaders have blamed the attacks on religious hardliners who have become emboldened since Modi swept to power at the general election in May. A series of recent mass conversions of Muslims and Christians to Hinduism allegedly by Hindu hardliners have also raised concern.

Modi’s government this week denied that “communal” politics were behind the vandalism, robbery and arson attacks on Christian establishments, many of them in Delhi. “We have found that all these incidents were law and order problems,” Finance Minister Arun Jaitley told the NDTV network.

Around 80 percent of India’s 1.2 billion population is Hindu, but it is also home to large numbers of Muslims, Christians and Buddhists.