India Reaches Out to Africa in Resources Race With China 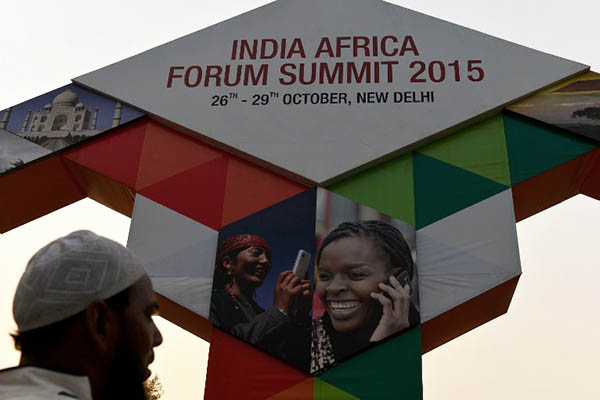 Over 40 leaders will attend summit in New Delhi in hopes of expanding trade.

India will host an unprecedented gathering of African leaders next week as it ramps up the race for resources on the continent, where its rival China already has a major head start.

Postponed since December over the Ebola crisis, the India-Africa Forum Summit from Oct. 26-29 will be the first under Prime Minister Narendra Modi and the biggest gathering of foreign dignitaries in India since 1983. Hotels have been block-booked and intense security is expected to add to the chaos on Delhi’s congested streets.

More than 40 leaders have confirmed their attendance, with controversy looming over the possible appearance of Sudanese President Omar al-Bashir, who is wanted by the International Criminal Court.

India’s presence in Africa is dwarfed by China, whose bilateral trade topped $200 billion last year—more than the GDP of the 30 smallest African economies combined. Yet economic winds blowing across the Indian Ocean have warmed considerably, with trade swelling twenty-fold from about $3 billion in 2000 to $70 billion in 2014, according to government data.

From Punjabi farmers leasing Ethiopian fields to a telecoms magnate running a Malawi mobile network, Indian entrepreneurs have led the charge in Africa as politicians scramble to follow. Keen to be seen as friend not predator, Delhi plays up a shared history that China lacks, citing 16th century maritime merchants who plied Africa’s coastline and the joint fight against colonialism.

Politicians point to a 2.7 million-strong Indian diaspora, including many in South Africa, where independence hero Mahatma Gandhi began his freedom struggle.

“Throughout the period of struggle for African independence against neo-colonialism, against apartheid, against discrimination… we’ve been brothers in arms,” said Navtej Singh Sarna, an Africa specialist at India’s foreign ministry.

Despite the shared history, the first India-Africa summit was just seven years ago—long after China, the European Union and Japan held similar get-togethers.

India’s Africa-bound investment is about $30 billion, the government says, a sixth of China’s. And African nations account for only 11 percent of India’s exports, with business body Assocham describing the relationship as “grossly under-utilized.”

While successive Chinese leaders have paid frequent visits to Africa, India’s have been more distant. An otherwise extensive traveler, Modi has yet to visit mainland Africa, although he has stopped off in Mauritius and the Seychelles.

As with China, Africa’s abundant natural resources are a draw for India, which imports 80 percent of its oil needs. Major African exports to India include minerals, metals, gemstones and chemicals. By far the greatest share of Indian investments is in energy, as it looks to Nigeria and Angola to help reduce reliance on the Middle East.

The Indian government has also loaned $300 million to build a rail link between Ethiopia and Djibouti. But the broad picture is of scattershot small to medium investments led by the private sector, contrasting sharply with China’s highly structured, state-sponsored mining and manufacturing mission.

“Our governments have not done enough,” Indian businessman Ramesh Awtaney, founder of ISON Group, which runs call centers and IT projects in countries including Burkina Faso, Tanzania and Chad, told AFP. “China has been pushing its agenda in Africa so hard, India has been left behind. I would like to see more bilateral talks.”

Modi’s government has been tight-lipped on what the summit will yield, aside from vagaries over enhancing trade. But it will be an opportunity to capitalize on disillusionment with China, whose demand for resources has plummeted as growth decelerates.

Deep-pocketed Beijing has for decades sprinkled stadiums, hospitals, highways and dams across Africa in exchange for deals. Yet critics say it has left countries heavily indebted and Chinese firms rather than locals have been the main beneficiaries of development projects.

While India cannot match its Asian rival’s financial heft it has worked hard to share skills and technology, and in 2011 extended $5.4 billion in credit for development.

India has set up a diamond-cutting facility in Botswana, a markets training center in Uganda, and a female peacekeeping force in Liberia.

Since 2008 it has granted 40,000 scholarships to African students to pursue higher education. Facing the future, the pair will share similar development challenges, with young, growing populations and hundreds of millions stuck in poverty.

Jagtar Singh, chief executive of India’s Coppice Technologies, which operates in Sierra Leone and Senegal, said Africa had much to learn from Indian expertise. “We have a lot of the same problems,” he said.