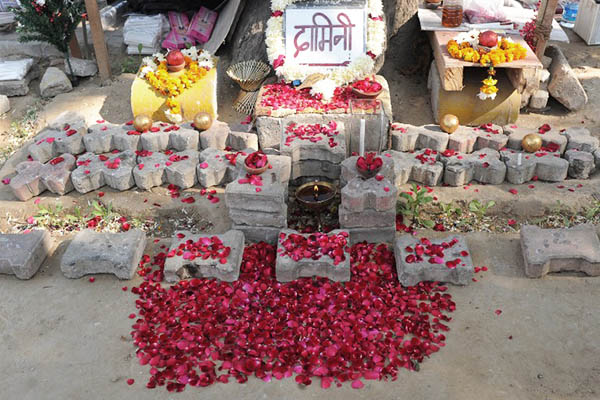 A memorial for Nirbhaya. Sajjad Hussain—AFP

Protesters mark the first anniversary of the death of the 23-year-old gang-rape victim who mobilized the nation.

With vigils and prayers, India on Sunday marked the first anniversary of the death of a student savagely gang-raped on a Delhi bus—a tragedy that sparked nationwide protests.

The 23-year-old physiotherapy student, dubbed Nirbhaya by the Indian media, died on Dec. 29 last year, nearly two weeks after being attacked by a gang of six men on a moving bus as she returned home from the cinema with a male companion. The attack and her subsequent death shook the country, shone a global spotlight on India’s treatment of women and unleashed seething public anger about sexual violence and harassment of women.

The victim’s family is holding a religious ceremony in their ancestral village in the northern state of Uttar Pradesh, away from the constant media attention they have faced since the attack, her brother said. “We want to remember her in a quiet way, away from all the glare. We want it to be a private family moment,” the brother, who cannot be named for legal reasons, said before the anniversary. The family will follow traditional Hindu rituals, with a prayer ceremony and symbolic offerings to their ancestors, which are believed to bring peace to those who have died.

The student, who was repeatedly assaulted with an iron rod during her ordeal, has been praised for her determination to report her attackers to the police before she died of her injuries. Four of her attackers were convicted and given the death penalty in September after the case was fast-tracked, while a juvenile was sentenced to a detention center. The sixth man died in prison in March in an apparent suicide.

The angry and sometimes violent protests against the attack jolted India’s Parliament, which this year passed tougher laws against rapists and other sex-crime offenders. Women’s groups say some improvements have also been made in the last 12 months to India’s notoriously slow, inefficient and sometimes corrupt police and judicial systems, which has encouraged some victims to report sexual crimes.

Despite the reforms, new cases of rape continue to be reported daily from across the country in the Indian press. An ambulance driver allegedly raped a 10-year-old girl after he drove her sick mother to hospital in the central state of Chhattisgarh, the Press Trust of India reported. Police have charged the driver over the Dec. 23 incident in Kanker district, the news agency reported on Saturday.

In the capital a small group of school students and workers gathered at Jantar Mantar on Sunday, a protest site in the city’s center where a makeshift memorial has been set up for the victim. They urged lawmakers to push ahead with reforms aimed at reducing crimes against women, including speeding up the justice system. “A lot more still needs to be done to ensure that India becomes an absolute rape-free nation,” said Akash Kumar, a school student from the nearby satellite town of Gurgaon. “We want the Indian government to set fixed time-frames for police investigations, court trials and ultimately punishment for the accused,” said Vikas Tyagi, a call-center worker.

Others at the memorial pushed for a fresh national debate on lowering from 18 the age at which juveniles are tried as adults for heinous crimes. One of the convicted attackers, who was 17 at the time of the assault, was sentenced to a maximum of three years in a detention center.

Those gathered at the memorial will place small lamps, candles and flowers around it during a vigil later Sunday, one of several expected to take place across the city.