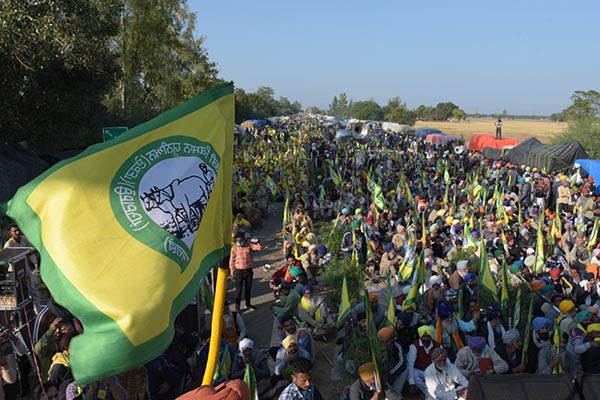 In statement, foreign ministry describes as inaccurate and irresponsible any commentary that does not factor in efforts to resolve the months-long demonstrations

The External Affairs Ministry of India on Wednesday issued a statement criticizing international celebrities for commenting on the ongoing farmers’ protests, claiming “vested interest groups” were trying to malign the country by mobilizing support against it.

“Before rushing to comment on such matters, we would urge that the facts be ascertained, and a proper understanding of the issues at hand be undertaken. The temptation of sensationalist social media hashtags and comments, especially when resorted to by celebrities and others, is neither accurate nor responsible,” read the External Affairs Ministry statement. It said that India’s Parliament had passed “reformist legislation” related to the agricultural sector that had encountered reservations from “a very small section” of farmers. Noting that 11 rounds of dialogue had already occurred, it lamented that “vested interest groups” were trying to derail the protests.

“This was egregiously witnessed on Jan. 26, India’s Republic Day. A cherished national commemoration, the anniversary of the inauguration of the Constitution of India, was besmirched, and violence and vandalism took place in the Indian capital,” it said. “Some of these vested interest groups have also tried to mobilize international support against India. Instigated by such fringe elements, Mahatma Gandhi statues have been desecrated in parts of the world. This is extremely disturbing for India and for civilized society everywhere,” it added.

Thousands of Indian farmers, mostly from Punjab province, have camped on the outskirts of Delhi for over two months, in a largely peaceful protest. Tensions spiked on Jan. 26, India’s Republic Day, when a tractor rally by farmers turned chaotic, leading to clashes between protesters and police that resulted in the death of one protester, and injuries of over 300 security personnel. Some protesters even raised slogans against the state, demanding justice. Delhi has blocked internet services at three protest sides—a commonly employed tactic by the Modi government to discourage protests.