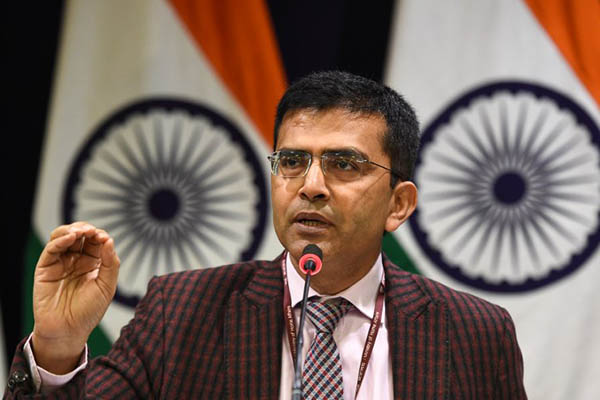 India said on Saturday that its army is on a “strict vigil” for new attacks from Pakistan and renewed warnings to its neighbor to take concrete action against militant groups.

The nuclear-armed rivals have maintained an uneasy calm since tit-for-tat cross-border air raids across their disputed Kashmir frontier last month. Each claimed to have shot down a fighter jet from the other side although only Islamabad has managed to verify its claims as it captured—and released—a downed pilot last week.

An Indian foreign ministry spokesman responded with skepticism to reports of scores of militants being rounded up in Pakistan this week. Islamabad was in “a state of denial” over its support for groups accused of staging attacks in India, the spokesman, Raveesh Kumar, said at a specially convened media briefing.

“Our armed forces continue to maintain strict vigil and will remain determined in the defense of the nation and its citizens,” he said. “We have and we will continue to act with responsibility and maturity,” he added.

India is suspicious of Pakistan’s statements it has clamped down on the Jaish-e-Mohammad group that claimed a suicide bombing in Kashmir last month that set off the showdown. Forty Indian paramilitaries were killed in the Feb. 14 attack.

India on Feb. 26 staged an air raid on a camp inside Pakistan that it said belonged to JeM. One day later Pakistan responded with fighter jets crossing into India-Occupied Kashmir.

A pilot who was shot down over Pakistani territory was later sent back to India.

Islamabad announced on Thursday that more than 100 militants, including many from JeM, had been detained. But Pakistan’s Foreign Minister Shah Mehmood Qureshi also recently denied in a television interview that JeM had claimed responsibility for the suicide attack.

The Indian spokesman said “the widespread presence of terrorist camps in Pakistan is public knowledge within and outside Pakistan.” He added, “Pakistan has failed to take any credible action against Jaish-e-Mohammad and other terrorist organizations, which continue to operate with impunity from Pakistan.”

Kashmir has been split between India and Pakistan since their independence and angry division in 1947. India has long accused its neighbor of supporting Kashmir rebels. Pakistan denies any role in attacks in the Indian side of the Himalayan region where tens of thousands have died in an armed insurgency since 1989.