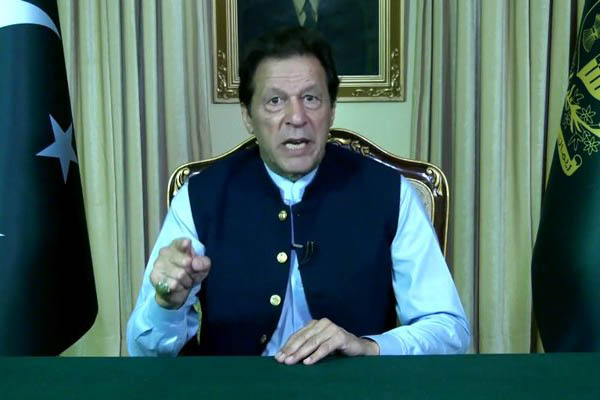 Pakistan’s premier reiterates at U.N. General Assembly that there can be no durable peace in South Asia until Kashmir dispute resolved

Prime Minister Imran Khan on Friday warned that any attempt by the “fascist totalitarian RSS-led Indian government” to target Pakistan would be met with a “nation that will fight for its freedom to the end.”

Addressing the U.N. General Assembly via video-link, Khan alleged that Delhi was trying to divert attention from its human rights abuses against Muslims in India by “playing a dangerous game of upping the military ante against Pakistan in a nuclearized strategic environment.” He said that Pakistan had exercised maximum restraint despite multiple provocations and ceasefire violations along the Line of Control. “We have consistently sensitized the world community about a ‘false flag’ operation and another ill-conceived misadventure by India,” he added.

Reiterating that there could never be lasting peace in South Asia without a resolution to the Jammu and Kashmir dispute, Khan urged the Security Council to prevent such a “disastrous” situation. “The Security Council must … secure the implementation of its own resolutions [on Kashmir] as it did in the case of East Timor,” he said, adding that it had already debated the situation in India-held Kashmir thrice in the past year and it was time for some enforcement measures to prevent “an impending genocide.”

Pakistan, he said, had always called for a peaceful solution. But for peace to prevail, India must reverse its measures of Aug. 5, 2019, “end its military siege and other gross human rights violations, and agree to resolve the Jammu and Kashmir dispute in accordance with the relevant U.N. Security Council resolutions and the wishes of the Kashmiri people,” he added.

The prime minister also detailed India’s abuses in India-held Kashmir since Partition in 1947, claiming 900,000 soldiers were besieging 8 million Kashmiris. Urging the international community to investigate all human rights violations—from the use of pellet guns to collective punishments and extrajudicial killings—Khan said the RSS-BJP actions were intended to alter the demographic structure of the disputed region and subsequently the results of any plebiscite. “This action is in violation of the U.N. Charter, Council resolutions and international law, particularly the 4th Geneva Convention,” he said, adding that the government and people of Pakistan would never stop supporting their Kashmiri brothers and sisters in their legitimate struggle for self-determination.

The prime minister said Pakistan’s desire for peace in the region was manifest in its efforts to promote a political solution in Afghanistan. “I have consistently maintained over the past two decades that there is no military solution to the decades-old-conflict in Afghanistan,” he said, pointing out that Islamabad had “fully facilitated the process” that culminated in the U.S.-Taliban peace agreement. “Pakistan is deeply gratified that it has fulfilled its part of the responsibility. The Afghan leaders must now seize this historic opportunity to achieve reconciliation and restore peace in their war-torn country,” he said.

He also emphasized the need for early return of Afghan refugees, which, he said, must be a part of the political solution. He also indirectly referred to India by warning that “spoilers” should not be allowed to subvert the peace process.

Peace and stability in Afghanistan, he said, would open new opportunities for development and regional connectivity and new vistas of cooperation could emerge with Central Asia and beyond.

The prime minister heralded Pakistan’s success in curbing the spread of COVID-19, but noted that the threat was not yet over. He repeated several talking points from last year’s speech, including his desire to model Pakistan after the Riyasat-e-Madina and the damage done to developing countries by illicit outflow of funds to tax havens. He said this situation needed to be addressed or it would accentuate the gap between the haves and have nots, adding that debt relief for developing nations was essential to help their economies prosper. He also spoke out against climate change, noting it was among the worst threats currently facing humanity.

The prime minister also reiterated his support for a two-state solution to resolve the Israel-Palestine conflict.

Speaking out against religious hatred, specifically targeting Muslims, Khan said Muslims were being targeted “with impunity” in various countries. Slamming the “freedom of speech” that allowed insults to Islam’s Prophet or destruction to mosques, he reiterated that “willful provocations and incitement to hate and violence must be universally outlawed.” In this regard, he said the U.N. should declare an “International Day to Combat Islamophobia” to fight this scourge that splits humanity.

“The one country in the world today, where the state sponsors Islamophobia, is India. The reason behind this is RSS ideology that unfortunately rules India today,” he said, noting that this extremist ideology was founded in the 1920s and had been inspired by the Nazi concepts of racial purity and supremacy.

“While the Nazis hate was directed at the Jews, the RSS directs it towards the Muslims and to a lesser extent towards the Christians. They believe that India is exclusive for Hindus and others are not equal citizens. The secularism of Gandhi and Nehru has been replaced by the dream of creating a Hindu Rashtra by subjugating, even cleansing India’s 200 million Muslims and other minorities,” he said, noting that the RSS had destroyed the Babri Mosque; slaughtered around 2,000 Muslims during riots in Gujarat; and burnt alive over 50 Muslims aboard the Samjhota Express train.

“Muslims were falsely blamed, vilified and victimized for spreading the coronavirus. They were denied medical attention on many occasions, their businesses were boycotted. Cow vigilantes attack and kill Muslims with impunity. Last February, Muslims faced targeted killings, with police complicity in New Delhi,” he said, and warned that mass registrations such as India’s National Register of Citizens were often a precursor to genocide.

The prime minister ended his speech by stressing that the U.N. remained the “best legitimate” avenue for collective action against international conflicts, promoting equitable development, and addressing global problems. “Pakistan will continue to participate actively in this process and endeavor, with other member states, to build a world where conflict is outlawed and equitable prosperity for all pursued in conditions of peace and security,” he added.