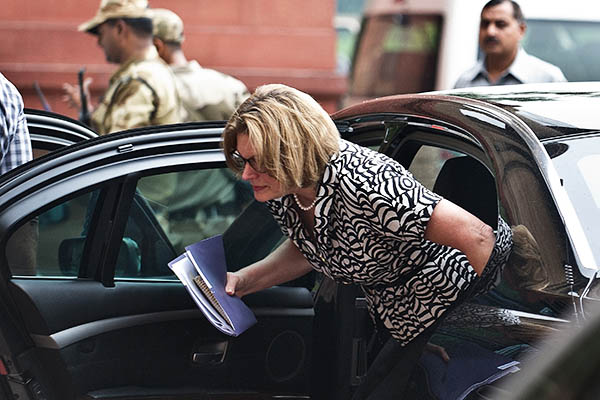 The acting U.S. ambassador arrives at the Ministry of External Affairs. Prakash Singh—AFP

New classified document has revealed that the BJP and Pakistan’s PPP were among authorized targets for the NSA in 2010.

India summoned the top diplomat from the U.S. embassy on Wednesday to complain for the third time about spying, following new allegations that Washington’s National Security Agency targeted its ruling party.

“What we have said is that we expect a response and an assurance that this won’t happen again,” said a foreign ministry source on condition of anonymity.

A new classified document made public by The Washington Post on Monday showed that Prime Minister Narendra Modi’s Bharatiya Janata Party (BJP) was among authorized targets for the NSA in 2010 while it was India’s main opposition. India has complained to the United States on two previous occasions, in July and November 2013, over other revelations—including the disclosure that its U.N. mission in New York and its Washington embassy were snooped on.

Both times Washington has said it would look into what it can share about its espionage program but failed to offer any details, the source said. “We have said that we would like a response, which we haven’t received,” he said.

The new incident comes ahead of a visit to New Delhi by U.S. Secretary of State John Kerry, who is expected to meet Modi and other government members in the next few months. The Indian P.M., whose party swept to power in May with the first majority in 30 years, will travel to the United States in September for the U.N. General Assembly and his first meeting with President Barack Obama.

Sen. John McCain arrived on Monday, the first high-ranking U.S. politician in India since the change of government. He met Foreign Minister Sushma Swaraj but then cancelled a scheduled interaction with the press as news of the latest diplomatic row played out on Indian news channels.

The BJP was listed among six foreign political parties—along with Egypt’s Muslim Brotherhood and the Pakistan Peoples Party—on which the NSA was given permission to carry out surveillance in 2010, says the document published by The Washington Post. It was supplied by fugitive U.S. intelligence worker Edward Snowden.

The PPP expressed “grave disappointment” at the spying revelations in a statement posted on its website. The political party, currently in the opposition in Pakistan, has also called upon Islamabad to pursue the issue at diplomatic levels and “seek guarantees that such grave violations of international law do not take place in future.”

“Such insensitive operations and unacceptable interference in the affairs of a political party of a sovereign country will serve no purpose except to increase resentment and distrust,” said the release, adding, “Those who have violated the norms of responsible behavior by spying on the political institutions of a sovereign country owe an apology.”

“We have taken note of these reports of illegal spying by a foreign country’s agency on the BJP and it is certainly not good,” said BJP vice president and senior spokesman Mukhtar Abbas Naqvi. “Our government is already looking into it and will act in accordance with procedure.”

The U.S. embassy in New Delhi is currently between ambassadors, meaning acting ambassador Kathleen Stephens is its most senior diplomat. “As is standard, the U.S. does not comment on its bilateral diplomatic communications with a host government,” said an embassy spokesman when asked about the summons.

Relations are still recovering from a damaging dispute in December about the arrest of an Indian diplomat in New York, who was charged with visa fraud over the employment of a domestic servant. The detention provoked a furious reaction from India and raised more doubts over a troubled alliance which Obama hoped in 2009 could become “one of the defining partnerships of the 21st century.”

The U.S. is keen to build personal relations with Modi, having been the last country to lift a decade-long boycott of the Hindu nationalist over religious riots that occurred while he was running his home state of Gujarat in 2002. U.S. ambassador to India Nancy Powell resigned in April, six weeks after she met Modi for the first time amid criticism that Washington had been too slow to embrace the man widely tipped to win this year’s election.