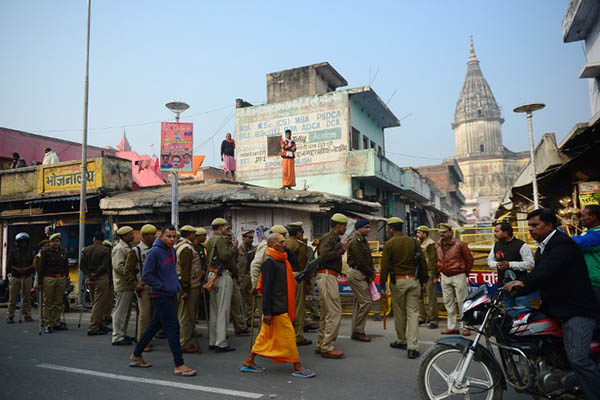 India’s Supreme Court on Saturday delivered its verdict in the long-running Ayodhya dispute, ruling in favor of a Hindu group over who controls the land where the 16th century Babri Mosque stood until its destruction in 1992.

The ruling paves the way for the construction of a Hindu temple at the site, which has been beset by controversy since the 1992 sectarian violence that left around 2,000 people, mostly Muslims, dead.

Delivering its verdict, the apex court ruled that the site in Ayodhya must be handed over to a trust to oversee the construction of a Hindu temple, subject to conditions. It also directed for the allotment of a separate piece of land to Muslim groups to build a new mosque.

Ahead of the verdict, India ramped up security across the country and P.M. Narendra Modi urged calm. Thousands of extra personnel were deployed, and schools closed in and around Ayodhya and other regions, including India-held Kashmir.

Supporter of Modi’s Hindu nationalist Bharatiya Janata Party have long held that Lord Ram, the warrior god, was born in Ayodhya. They claim that in the 16th century, the first emperor of the Mughal Islamic dynasty, Babur, built a mosque on top of a temple at the site. Pressure began to grow to demolish the mosque and replace it with a Hindu temple in the 1980s, with the unrest peaking in 1992 when a Hindu mob—believed to number around 200,000—razed it to the ground, provoking some of the worst religious riots since Partition in 1947.

It is hoped that the verdict will finally put an end to the controversy that continues to surround the site.

The case has been winding its way through the Indian legal system for many years. In 2010, a high court directed Muslims and Hindus to share it, though it gave the majority of the land to Hindu groups. Both groups appealed this decision, and the Supreme Court in 2011 stayed the lower court’s ruling, leaving the issue unresolved.

A central plank of the BJP’s campaign was promising to build a temple at Ayodhya, and the verdict is considered a major victory for the party and for Modi. By contrast, it will undoubtedly worry India’s 200-million-strong Muslim minority, who fear the BJP wants to further sideline them and continue its path to turn India into a purely Hindu nation.

Despite these concerns, the government earlier appealed for calm, regardless of the verdict. Modi’s BJP and its more hardline RSS cohorts have urged supporters to avoid provocative celebrations. Muslim groups have also appealed for calm.

“Whatever is the verdict by the Supreme Court, it won’t be anybody’s win or loss,” Modi tweeted late on Friday. “My appeal to the people of India is that our priority is to ensure the verdict strengthens the values of peace, equality and goodwill of our country.”