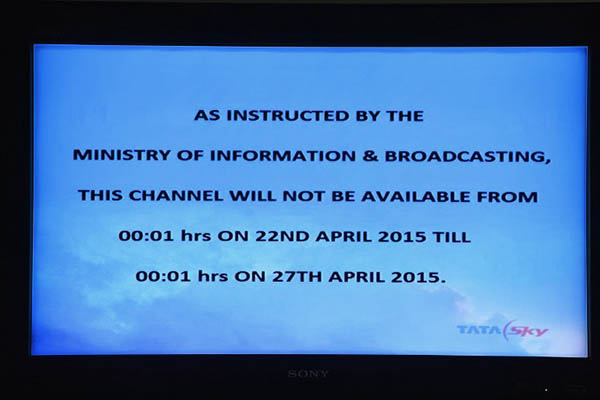 Managing director of channel says New Delhi has placed several constraints on channel over the years.

Al Jazeera in India showed a blue screen on Wednesday with a sign saying “as instructed by the ministry of information and broadcasting, this channel will not be available.” An official said the order was made earlier this month over the maps that showed parts of the Himalayan Kashmir region in archrival Pakistan and China, an extremely sensitive issue in India.

“The ban has been imposed for five days and it was done on instructions of an inter-ministerial committee, who took cognizance of an incorrect map of India in which the channel showed parts of Kashmir in Pakistan and China,” the official told AFP on condition of anonymity.

The order comes amid a simmering censorship row in India over a series of recent bans that have sparked accusations of a growing climate of intolerance under Hindu nationalist Prime Minister Narendra Modi. They include a ban on screening a BBC documentary on the fatal gang rape of a student that sparked mass protests in Delhi.

“Unfortunately, this is the latest in a series of ongoing issues. Our journalists have not been granted visas for years now,” Anstey said in a statement to the media. “We have though been severely hampered for too long by constraints placed upon us when trying to tell Indian stories to the world,” the statement added, urging the information minister to hold talks “that will help us move forward in a constructive way.”

According to local media reports, Al Jazeera breached India’s broadcasting code over the maps shown in 2014 and 2013 which on some occasions also did not include the Lakshadweep and Andaman islands.

Kashmir is divided between India and Pakistan but both claim the whole of the region and have gone to war twice over its control since Partition in 1947.

New Delhi imposes tight restrictions on all printed maps, insisting they show all of Kashmir as being part of India. The government in 2011 ordered The Economist magazine to cover up a map of disputed borders in Kashmir. The newsweekly placed white stickers over a diagram of the borders on 28,000 copies on sale in India.

“Eventually India might realize how idiotic this looks,” the magazine’s South Asia bureau chief Adam Roberts tweeted over the order against Al Jazeera.