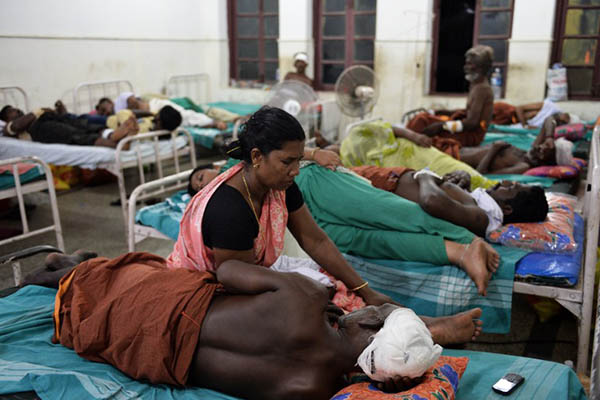 New Delhi announces compensation for families of those killed and injured in explosion caused by stray firework.

A massive explosion and blaze apparently sparked by a stray firework during an unauthorized display killed over 100 people and injured scores more at a temple in southern India on Sunday.

Thousands had packed overnight into the Hindu temple complex in Kerala state where the firework is thought to have landed on a stockpile of others, triggering a huge blast that tore through concrete buildings. “It came like a storm, throwing everyone to the ground. There were bodies all over the place and the injured were writhing in pain,” said Anish Kumar, who had gone with his friends to see the display at the Puttingal Devi temple in Kollam district. “I was horrified to see hundreds of men and women on the ground lifeless,” said Kumar, who lost one of his friends in the disaster.

Prime Minister Narendra Modi described the accident as “heart-rending and shocking beyond words” and toured the complex and met the injured in a hospital. “The incident is so grave that it is very difficult to describe in words. People who were 200 meters away were also hurt,” Modi said. “And right now the doctor was telling me that some of the blasts were such that some peoples’ bodies were blown apart.”

A team of specialist doctors was deployed from New Delhi amid reports of horrific burn injuries. The navy and air force also sent helicopters to evacuate the most critically injured, officials said. “Total death total is 106 with 75 of those identified and 31 unknown,” said a spokesman for Kerala Chief Minister Oommen Chandy.

Firefighters and police had battled at the temple in the coastal town of Paravur to douse the fire and rescue those trapped at the complex. But residents said some victims were charred beyond recognition.

Video footage showed a series of explosions and fireworks erupting about 3 a.m. along with huge plumes of smoke. Local residents carried the bloodied and injured victims in their arms from the scene. They told of the force of the explosion sending concrete slabs and other building parts slamming into the crowd.

Chandy and other officials said the temple had gone ahead with the fireworks display despite being refused permission. “I had denied permission for this fireworks because they had asked permission for conducting it on a competition basis,” Kollam district collector A. Shainomal told the NDTV network.

The Kerala government ordered a judicial inquiry into the cause of the disaster and Chandy’s spokesman told AFP that police have registered a criminal case against temple authorities.

Local lawmaker N. K. Premachandran said a fireworks competition traditionally held every year between different groups had occurred at the temple, drawing thousands to watch. One firework landed on a building that was storing the rest of the pyrotechnic material, triggering the explosion, he said.

Fires and stampedes are not uncommon at temples and during religious occasions, often because of poor security arrangements and lax safety standards.

Emergency room doctor Rajesh Kumar said those who poured into his hospital were suffering from head injuries and burn wounds, and several had needed amputations. “Seven people had partial amputations in the blast and we had to amputate surgically. Most of the injured had head, torso and internal injuries, a few had burn injuries,” he told AFP at a hospital in the state capital Thiruvananthapuram.

Modi announced INR 200,000 in compensation for the families of those killed and INR 50,000 for those injured.

Messages of condolence poured in from around the world, with Pope Francis’s office saying the pontiff was “praying for all affected by this tragedy.” Britain’s Prince William and wife Kate said through a spokesman that they were “saddened by the news” after arriving in India on Sunday for an official tour.

The fire comes as Kerala—governed by the Congress party, which is in opposition at the national level—heads to the polls in one of five state elections being held in India this month and next.