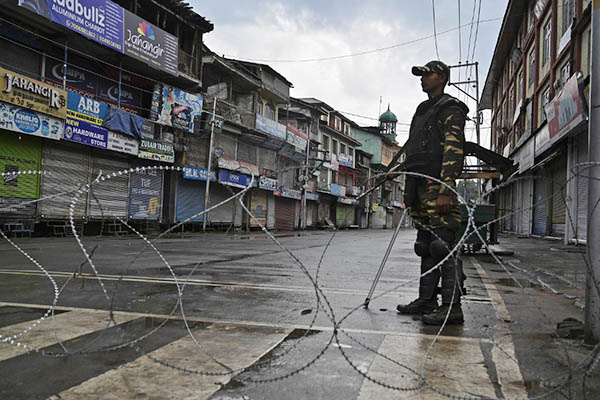 New Delhi is muzzling India-held Kashmir’s media as part of the lockdown it imposed on the disputed region a month ago, according to a new report by two rights networks.

The study comes after Delhi revoked India-held Kashmir’s special autonomy on Aug. 5 and sent in tens of thousands of extra troops to reinforce the half a million already there. Published earlier this week, the study said reporters were being subjected to surveillance, informal investigations and harassment for publishing reports considered adverse to the government or security forces.

Titled News Behind The Barbed Wire, its findings reveal “a grim and despairing picture of the media in Kashmir, fighting for survival against the most incredible of odds.” It also highlighted that recent editorials in major Kashmir papers covered only harmless topics, such on the benefits of Vitamin A and “Should you consume caffeine during summer?”

“This is intrinsically undemocratic and harmful, as it privileges the voices of authority and weakens those who speak truth to power,” the report said of the situation faced by the media in India-held Kashmir.

Published by the Network of Women in Media, India and the Free Speech Collective, the report was prepared by two journalists who spent five days in India-held Kashmir and spoke to more than 70 journalists, local administration officials and citizens.

An official in the Information and Broadcast Ministry told AFP on Friday it could not offer any immediate comments as it had yet to see the report.

The government has also restricted movement and curtailed phone and internet services, ostensibly to control unrest in a region where separatists have waged an armed rebellion against Indian rule since 1989. The Indian government says bringing Kashmir under its direct rule will boost the economy and generate more jobs. It also insists the situation is calm and normal and that the curbs are being eased gradually.

Since Aug. 5, at least 500 protests and incidents of stone throwing have occurred and some 4,000 people have been detained, according to multiple sources. Five civilians have also died, the army said this week, blaming the deaths on stone-pelters and militants.

The Kashmir move has enraged neighboring Pakistan, which also claims the region. Kashmir has been the spark for two major wars and countless clashes between the two nuclear-armed archrivals.