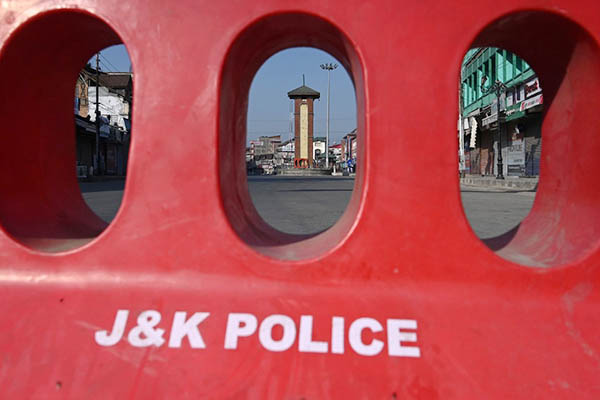 Authorities on Sunday tightened a month-long security lockdown in Indian-held Kashmir’s main city of Srinagar after breaking up religious processions by Shia Muslims who defied a ban.

A military clampdown was imposed in Muslim-majority Kashmir from Aug. 5, ostensibly to prevent unrest, as New Delhi revoked the disputed region’s autonomy, with mobile phone networks and the internet still cut off in all but a few pockets.

Police drove around the city from early Sunday, announcing through loudhailers that “residents are informed not to venture out of their homes.” They added: “Strict action under law would be taken against violators.”

Shia Muslims worldwide stage processions and hold rallies during Muharram, the first month of the Islamic calendar—which started on Sept. 1 this year—to mark the anniversary of the death of a grandson of Islam’s Prophet. Most such processions have been banned in Indian-held Kashmir since the outbreak of insurgency against New Delhi’s rule in 1989, on grounds that the rituals could be used to stoke anti-India sentiment.

AFP saw at least two small protests on Sunday morning by between eight to 10 Shia mourners, who were quickly detained and taken away in police vehicles. Police were also seen hitting the mourners with bamboo sticks.

Kashmir, split between India and Pakistan since 1947, has been the spark for two major wars and countless clashes between the two nuclear-armed archrivals. Indian-held Kashmir has seen a decades-old armed rebellion against Indian rule with tens of thousands, mostly civilians, killed.

On Saturday, four local journalists were injured while covering a protest involving up to 5,000 demonstrators, one of the biggest gatherings since the lockdown was imposed. One journalist said his camera lens was broken and another had visible marks on his body after he was allegedly hit with bamboo sticks by security personnel.

Authorities had loosened the curfew in parts of Srinagar gradually in recent weeks but began to enforce it again from Friday. An AFP reporter said Sunday’s clampdown was one of the tightest since Aug. 5. While barricades had been manned by up to three paramilitary troopers, there were now up to 10.

Tensions could further heighten on Tuesday, which is Ashura, the climactic 10th day of Muharram.

While the rituals are traditionally marked by Shia Muslims in the Sunni-majority valley, Sunnis told AFP they would take part in processions on Tuesday to show solidarity with their fellow Muslims. The tightened security measures came a day after India’s national security adviser said, without any evidence to support his claims, that the lifting of communication restrictions in Indian-held Kashmir depended on Pakistan stopping deploying “terrorists” and fomenting unrest there.