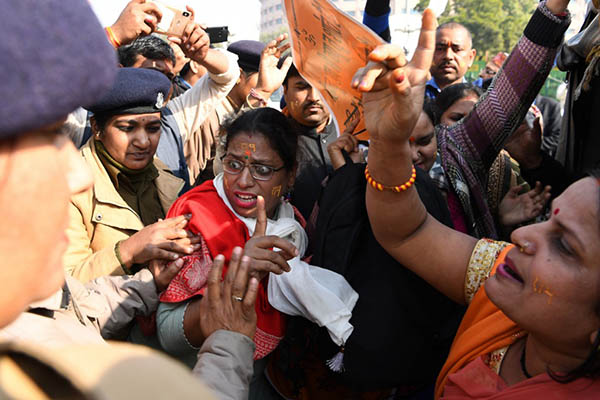 Supreme Court set to conclude hearings into site of Babri Masjid on Oct. 17

Authorities have tightened security restrictions in the northern Indian flashpoint city of Ayodhya ahead of a crucial Supreme Court ruling over the disputed site fiercely contested between Hindus and Muslims.

Hindus and Muslims have for decades been bitterly divided over the 16th-century Babri mosque in Ayodhya, a city in Uttar Pradash state.

Tensions boiled over in 1992 when Hindu zealots destroyed the mosque, sparking religious violence that killed 2,000 people. The Supreme Court is expected to conclude on Oct. 17 hearings into appeals against a key 2010 court ruling that both groups should split the site, with Hindus granted the lion’s share.

The restrictions under section 144 of the Code of Criminal Procedure prohibiting more than four people to assemble were first imposed on Aug. 31, Ayodhya’s district magistrate Anuj K. Jha said on Sunday, but were tightened further on Saturday.

“The order has been issued considering safety and security of Ayodhya and those visiting here as Govt’s paramount concerns,” Jha tweeted late on Sunday.

The new orders said that “drones, unmanned aerial vehicle, unknown flying objects or anything that can be weaponized are banned without prior permission from district authorities.” The district also banned firecrackers popular during this time of the year when Hindus mark several major religious festivals, some involving Hindu deity Ram who they believe was born in Ayodhya.

The orders will be in place under Dec. 10. The Supreme Court is expected to hand down its ruling before Chief Justice Ranjan Gogoi retires on Nov. 17.

Many Hindus believe the medieval mosque that stood there for 460 years was only built after the destruction of an earlier temple. Prime Minister Narendra Modi’s Hindu nationalist party has campaigned on constructing a new temple on the site of the razed mosque.