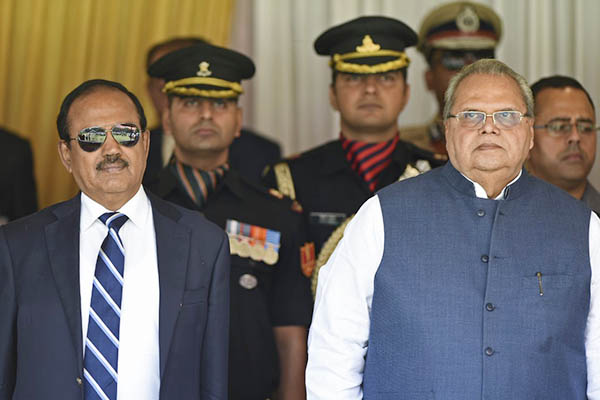 New Delhi’s crippling 10-day-old curfew in India-Occupied Kashmir will ease after Thursday, according to the state governor, but phone lines and the internet will remain cut.

India shut off communications and severely restricted movement in the part of Kashmir it controls on Aug. 4, a day before New Delhi stripped the Muslim-majority region of its autonomy. Fearing protests and unrest in the long-restive region, tens of thousands of extra Indian troops have been deployed, turning the picturesque main city of Srinagar into a warren of barbed wire and barricades.

While rules on the movement of people would be eased after India’s Independence Day celebrations on Thursday, state governor Satya Pal Malik said that phone lines and the internet would remain down. “We don’t want to give that instrument to the enemy until things settle down,” Malik told the Times of India. “In a week or 10 days, everything will be alright and we will gradually open lines of communication.”

The lockdown has not completely prevented anger at Prime Minister Narendra Modi’s move bursting out into the open, however. According to residents around 8,000 people protested after Friday prayers, with security forces firing tear gas and pellet-firing shotguns to break up the rally. Only on Tuesday did the Indian government confirm that clashes, blaming them on stone throwing “miscreants” and saying its forces reacted with “restraint.”

Footage filmed by AFP on Monday showed hundreds of people protesting in the Soura area of Srinagar, shouting slogans such as “We want freedom” and “India go back” as helicopters buzzed overhead. “What India has done is unacceptable to us. Our struggle will continue even if India keeps Kashmir locked down for months,” one protester told AFP.

India’s home ministry said on Tuesday that since the curfew was imposed, “no bullets have been fired.” But Munir Khan, a senior police officer in India-Occupied Kashmir, said that the military has used pellet-firing shotguns. “There have been 2-3 pellet injuries but they are nothing major. There is nothing grave,” Khan told AFP. He added that some security personnel were also injured.

In Srinagar’s main SMHS Hospital, one young man was nursing his eye, saying he had been shot by pellets fired by soldiers as he came out of a mosque on Monday. “We could not pray in peace on the day of Eid. A large number of soldiers surrounded the mosque,” a man by his bedside said, also declining to give his name.

Elsewhere in the ward, six-year-old Munefa Nazir slept with her right eye bandaged as her family took turns waving a handheld fan to keep her cool. According to her uncle, she was shot in the eye by a marble fired from a catapult by an Indian soldier at a checkpoint as they rode on his scooter on Monday evening. “She screamed and blood from her eye started oozing through her fingers as she covered her face with both hands,” Farooq Ahmad said.

The 1,000-bed SMHS is usually busy but because of the curfew only a few beds were occupied in some sections. Many pharmacies have also run out of some supplies. “We have run out of a lot of prescription drugs people here look for,” said Mubashir Hussain, a salesman at a medical shop in the Jawahar Nagar area where restrictions on public and vehicular movement have been eased since Monday.