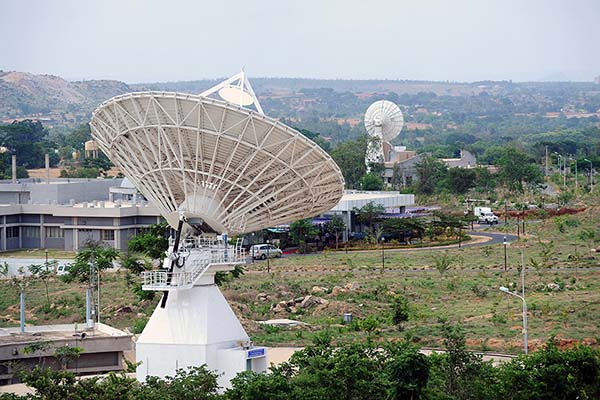 India will launch on Monday the first stage of its domestic satellite navigation network, which will eventually provide services both to civilians and the military and is similar to the U.S. Global Positioning System, officials said.

The first of seven satellites will be carried into space as part of the Indian Regional Navigation Satellite System (IRNSS), a few months after China inaugurated its own domestic satellite navigation system.

“The [Indian] system has been indigenously built to provide accurate position or location information services to users across the country and up to 1,500 kilometers away from our borders,” said Devi Prasad Karnik, director of the Indian Space Research Organization (ISRO).

A rocket carrying the first satellite is expected to take off at 11:41 p.m. Monday from a site in the southeastern state of Andhra Pradesh.

“The 1,425-kilogram satellite will be put into equatorial orbit 20 minutes after liftoff,” said Karnik from Bangalore, where the state-run space agency is based.

One satellite will be launched every six months with the IRNSS expected to be fully operational by 2015, the space agency said. IRNSS will provide commercial and public navigational services such as helping with disaster management as well as movements of India’s military, including those of ships and aircraft.

“When fully operational, the system will provide two types of services; standard positioning service and restricted service,” Karnik said, after the countdown for the launch began on Saturday. “The former will be provided to all users while the later will be an encrypted service for authorized users such as the military and security.”

India has a well-established space program that is a source of strong national pride, but its cost has attracted criticism as the government struggles to tackle poverty and child malnutrition.

China’s Beidou, or Compass, navigation system started providing services in the region in December, and is expected to offer global coverage by 2020. Beijing began building the 16-satellite network in 2000 to avoid relying on the U.S. GPS system. Reports in June said Pakistan, which has fought three wars with India, was set to become the fifth Asian country to use the Chinese system.