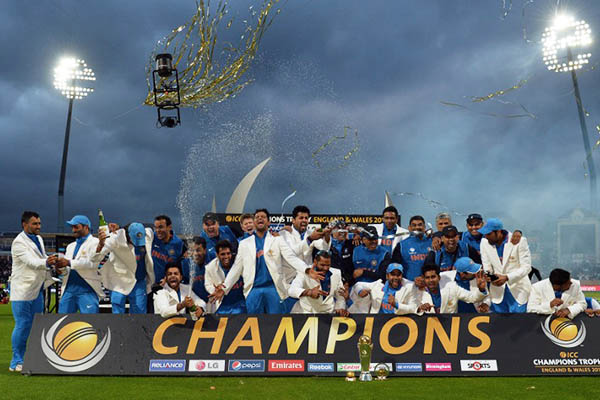 India will begin the defense of their Champions Trophy title against rivals Pakistan at next year’s tournament in England and Wales, the International Cricket Council announced Wednesday.

The June 4, 2017 clash between the sub-continental giants will take place at the Edgbaston ground in Birmingham—a city with one of the largest Asian populations in England.

ICC chief executive David Richardson, speaking at the tournament launch at The Oval on Wednesday—exactly a year before the 2017 Champions Trophy starts, was asked if the draw was a matter of pure coincidence. “What we try and do is make sure that when you add up rankings of the different groups, that they all add up to the same number of points,” he replied. “You can do that in a number of ways. You can go ‘Zig, zag,’ you can go like a snake.”

Former South Africa wicketkeeper Richardson added: “No doubt we want to try and pit India versus Pakistan in our event. It’s massive around the world, and it’s probably no coincidence the two keep ending up in the same group.”

India beat England by five runs at Edgbaston in a rain-reduced final to win the Champions Trophy, a tournament for the world’s top eight 50-over one-day international (ODI) nations, at the last edition in 2013.

With India and Pakistan in a Group B also featuring South Africa and Sri Lanka, Group A features a renewal of one of another great cricket rivalry—England and Australia.

The Ashes foes have been drawn alongside New Zealand and Bangladesh.

England will be especially keen to beat Bangladesh, the team that knocked them out of last year’s World Cup, when they open the Champions Trophy against the Tigers at The Oval, Surrey’s headquarters in south London, on June 1, 2017.

Meanwhile world champions Australia will start their bid to win a third Champions Trophy against New Zealand at Edgbaston on June 2, 2017 in a repeat of the 2015 World Cup final.

England’s 15-run loss to Bangladesh at the World Cup in Adelaide prompted a radical rethink of their approach to white-ball cricket.

They went all the way to this year’s World Twenty20 final, only for Eoin Morgan’s men to suffer an agonizing last-over loss to the West Indies in Kolkata in April. “At the last two 50-over tournaments we’ve played [Bangladesh] and they’ve been very tricky opposition,” said England one-day captain Morgan, alongside Richardson at The Oval. “In the last two years they’ve come on leaps and bounds,” added Morgan, skipper of the England side tamed by the Tigers at the World Cup. “The evolution of the 50-over game has been unbelievable since the most recent World Cup. We’ve been doing our best to play catch up, and the rate we’re growing as a side at the moment is really good for English cricket.”

The 2017 Champions Trophy will run from June 1-18, with the three venues—The Oval, Edgbaston and Cardiff—the same grounds that were used for the 2013 edition.

The top eight sides in the 50-over world rankings as at Sept. 30, 2015 have qualified for the tournament and that meant there was no place for World Twenty20 champions the West Indies, beaten to eighth spot by Pakistan. The top two teams in each group will go forward to semi-finals at Cardiff, the capital of Wales, and Edgbaston on June 14 and 15 respectively, with The Oval, staging the final. Unlike 2013, there will be a reserve day in place for next year’s final.