India to Swap Pellets for Chili in Kashmir 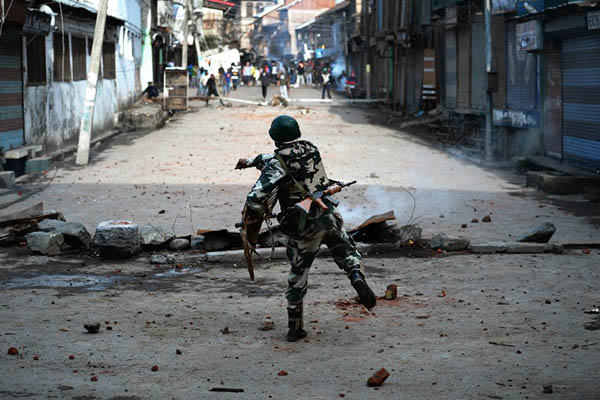 Police and troops in India-administered Kashmir will use chili-based shells instead of pellet guns to quell protests, a minister said on Monday, after hundreds of civilians sustained serious eye injuries in weeks of unrest.

The government has been coming under growing pressure over the level of casualties in Kashmir during protests against Indian rule since the death of a popular rebel leader on July 8 in a gunbattle with soldiers. More than 70 civilians have been killed and thousands injured in the worst violence to hit the Muslim-majority territory since 2010, with many sustaining injuries from metal pellets fired from pump-action shotguns.

Speaking on a visit to the state capital Srinagar, Home Minister Rajnath Singh said an expert panel had recommended the use of Pelargonic Acid Vanillylamide (PAVA) shells as an alternative to the mainly lead-based pellets. “The expert panel suggested the use of PAVA shells and I understand that no one can die from it,” Singh told reporters as fresh violence erupted in parts of the territory. “Since yesterday, 1,000 shells have already reached Kashmir,” he added.

PAVA, also called Nonivamide, is present in chilies and is commonly used to make pepper spray.

Pellet guns are meant to minimize fatalities in protests although the law gives the armed forces a relatively free hand to use lethal force, especially against suspected militants. But although they rarely result in deaths, the birdshot from the pellets can often blind victims if the fragments hit them in the eye.

Hospitals say they have treated around 600 patients with eye injuries in the last two months, many of whom will never recover full vision.

Authorities lifted a curfew in most parts of the territory late last month, but schools, shops and many banks remain closed while residents struggle with a communications blackout. Fresh clashes were reported at protests in large parts of the restive region on Sunday, with sources putting the number of injured in three figures.

“We have not the actual count of the injured but it is certain that a considerable number of forces personnel are also among them,” said a senior police official on condition of anonymity.