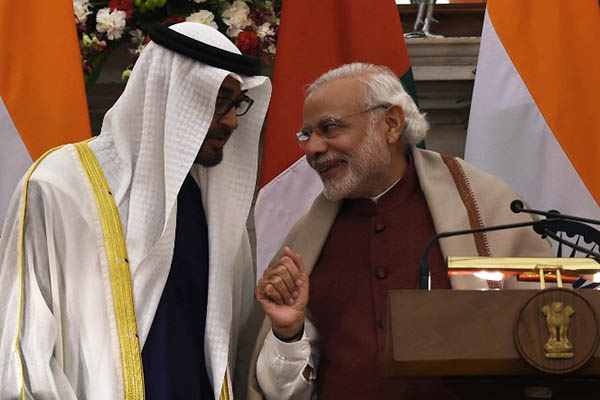 India and the United Arab Emirates on Thursday signed deals in fields ranging from space technology to renewable energy during a visit to New Delhi by Abu Dhabi’s crown prince, the Indian foreign ministry said.

The space cooperation pact comes as the U.A.E. seeks India’s expertise for its first interplanetary expedition, according to the Press Trust of India. The Emirates Mars Mission orbiter is scheduled to touch down on Mars in 2021 in a mission to mark the 50th anniversary of the founding of the U.A.E.

Other agreements covered skill development, insurance and culture, Swarup added in another post on the social media site.

Modi posted on Twitter after meeting Al-Nahyan that the two leaders had enjoyed a “productive interaction.”

“Avenues of India-U.A.E. cooperation are immense,” he tweeted.

Trade between the countries reached $59 billion last year, but U.A.E. state minister for foreign affairs Anwar Gargash said ahead of the visit that the countries were seeking to boost this by 60 percent within five years.

The crown prince, deputy chief of the U.A.E. armed forces, arrived for the three-day trip—his first visit to India—late Wednesday accompanied by a large business delegation.

The trip comes six months after Modi became the first Indian premier in three decades to visit the U.A.E., underlining India’s push to forge deeper ties with the oil-rich state.

Abu Dhabi is the largest of seven emirates that make up the U.A.E., which is India’s third largest trading partner, after the U.S. and China. The U.A.E. is also home to around 2.6 million Indians who mostly work on construction sites—the largest expatriate community in the country.

Al-Nahyan is scheduled to head to Mumbai on Friday before wrapping up his visit.