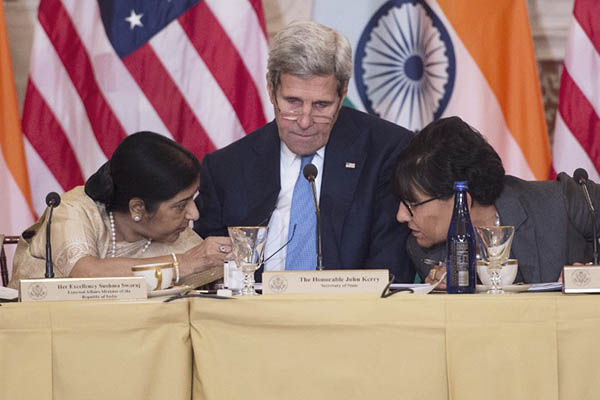 The world’s largest democracies, India and the United States, agreed measures to deepen their security and economic cooperation on Tuesday, part of an ambitious drive to boost trade between them five-fold.

After the talks, U.S. Commerce Secretary Penny Pritzker admitted that the idea of increasing exchanges from $100 billion to $500 billion a year was “a big audacious goal,” but said the meeting had left her very optimistic.

The “U.S.-Indian Strategic and Commercial Dialog,” was launched in January by President Barack Obama and Prime Minister Narendra Modi, and on Tuesday U.S. and Indian economic and diplomatic officials came together in Washington.

“The president and the prime minister set out a goal for us … and I think there’s a lot of opportunity,” Pritzker told AFP. “What feels new is the amount of energy that the Indian government is putting in to trying to remove the impediments that have been faced by foreign companies trying to do business in India.”

Asked how long it would take to increase trade fivefold, Pritzker said no deadline had been set but added: “When you set big audacious goals, it helps move bureaucracies, and that’s what’s happening. We’ve got to change the way we do business.”

The talks came as President Xi Jinping of India’s Asian rival China arrived in the United States, two days before Modi was due, but U.S. officials insisted there was no plan to build up India as a counterweight to Beijing. Instead, they celebrated what Obama has dubbed the “defining relationship of the 21st Century” with agreements to fight terrorism and climate change and to bolster cooperation in energy, hi-tech and defense.

U.S. Secretary of State John Kerry said: “The U.S.-India relationship is a bright spot on the international landscape and is one of the most important bilateral relationships in the world. Our talks today have given us a platform for further progress … There are so many areas of cooperation. There is so much going on between us.”

Indian officials had said that their priority for the talks was reinforcing commercial ties and securing access to U.S. inward investment and technology, but also hailed a joint determination to fight terrorism. “A main take away from our discussions includes our shared view that we need to keep the big picture, the strategic framework of the relationship in mind,” Indian Foreign Minister Sushma Swaraj told reporters.

The talks set up a meeting in New York next week on the sidelines of the United Nations General Assembly between Obama and Modi, whose four-day visit begins Sept. 24. “And then we have a very robust discussion regarding counterterrorism, the Indian Ocean, maritime security, the South China Sea, the South Asian challenges of the moment,” Kerry said.

Kerry, Swaraj and Pritzker were joined by India’s minister of state for commerce and industry Nirmala Sitharaman and U.S. Energy Secretary Ernies Moniz for the talks. Aside from China, which is expanding its deep-water naval presence in the broader Asian region and staking a claim to disputed areas of the South China Sea, the other looming issue is that of climate change.

As India’s economic rise drags more of its huge population of 1.3 billion people into the middle class and the industrialized world, its historically low emissions levels are set to rise—just as the world is seeking cuts.

Indian officials made it clear before the talks that they will resist any pressure ahead of the Paris climate summit to act quickly, but came to Washington keen to work with U.S. firms on renewable energy technology.

India has not followed the typical development path of its Asian competitors, which typically focused on labor intensive but low cost manufacturing, and has instead leap-frogged toward a service economy. This leaves Delhi and Washington in competition in some areas, as was shown in the “off shoring” of U.S. call center jobs, but also in a situation whereby their firms can work together in high-tech innovation.

Modi will seek to build on this part of the relationship next week when he visits Silicon Valley and the San Francisco area of California to meet executives from Facebook, Google, Tesla, Cisco and Qualcomm. He will also host a huge stadium event in San Jose for around 20,000 of the three million American residents of Indian origin, seen as a dynamic community with a huge role in the tech sector.

Small is beautiful, to be a labour intensive and service economy is not bad because it was need of time when the poor countries were not equipped with modern technologies.