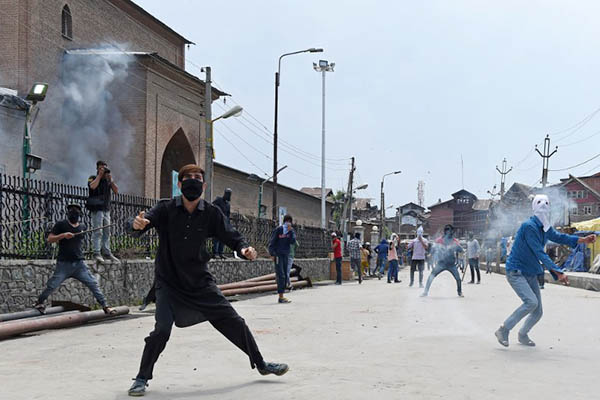 Another student death in clashes in India-administered Kashmir has heightened tensions in the disputed territory and worsened India’s worries about a foe that it cannot control—youths who do not carry guns.

The teenager was fatally shot in the chest during an exchange of fire between troops and suspected militants in Shopian, south of Srinigar, late Tuesday, sparking further violent protests. Students have taken the lead in protests, hurling stones at soldiers tracking militants who want Kashmir to break away from India.

More than 100 young men and women have been killed over the past year in the demonstrations. The deaths have increased anti-Indian sentiment in the part of the Muslim-majority Himalayan region it has controlled since 1947. Pakistan has the other chunk.

India is also worried about how to handle the anger. It considers the battle with armed militants to be a fair one but its leaders are unnerved about students whose only weapons are stones.

Indian army chief Gen. Bipin Rawat told Press Trust of India he wished “instead of throwing stones at us, [they] were firing weapons. Then I would have been happy. Then I could do what I want.”

Bedridden in a dimly lit room of his village home, Mohammad Younis, 18, is eager to join the protests. Indian soldiers shot the 18-year-old in the thigh in February. He had been walking through paddy fields to attend the funeral of a rebel killed by troops. “If I wasn’t stuck in this bed I would also go out to protest,” Younis told AFP at his home in Quimoh. His father, Mohammed Akbar, said the students were “not afraid of bullets and soldiers.”

“We were timid,” he added. “But this generation has to fight.”

The rebel, a former student known to Younis, was killed just 10 days after joining the separatists. About 100 young Kashmiris are believed to have joined the armed militants since rebel commander Burhan Wani was killed by security forces last July.

Wani, a media savvy leader, took up the armed cause at the age of 15, galvanizing Kashmiri youth by providing a new face for the militant movement. Student unrest intensified again in April when government forces raided a college in the southern town of Pulwama to arrest suspected protest leaders.

The army’s use of a Kashmiri man as a ‘human shield’ tied to the front of a military jeep as it drove away from stone-throwing protesters set off even greater controversy. Wasim Ahmed Bhat, a student, said he has been detained seven times since July and was not allowed to attend his father’s funeral. “Each time I was tortured,” he said.

In nearby Shopian, students in school uniform waited outside their campus on a recent day before classes, their teacher unable to coax them inside. The students had heard the army was approaching and within minutes were hurling stones at the vehicles as they whizzed past, horns blaring. “Go India, go back,” they shouted. “I understand their anger. Six of those killed last year were my students,” said the teacher, speaking on condition of anonymity.

Kashmir police deny allegations of widespread arbitrary detentions and torture. They say there are strict orders that government forces must not enter campuses. “We have been very lenient towards the students. In most cases we don’t even register cases against them in order to save their future careers,” Kashmir police chief Muneer Khan told AFP.

Speaking on condition of anonymity a top police officer conceded that during protests after Wani’s death nearly 3,000 students were detained. He said security forces were more wary of the protesters who come out in support of the militants when trapped in military cordons than the rebels themselves.

Students have always been a part of protests against Indian rule. Many helped an armed rebellion that erupted in 1989 despite tight controls on education institutions. But campus protests were rare until the college raid in April.

Analysts say there is a growing political consciousness linked to the new anger and the spread of Hindu nationalism in India after Prime Minister Narendra Modi won an election in 2014. “They can read and see through what is happening inside Kashmir as well as in India. And, the lack of strategy from the resistance leadership at home has left them directionless and looking into the abyss,” said professor Sidiq Wahid, a historian and a former university vice chancellor in Kashmir. “We can’t deal with this generation in this way,” a top police officer told AFP. “The crisis we see today is not going to go away soon.”