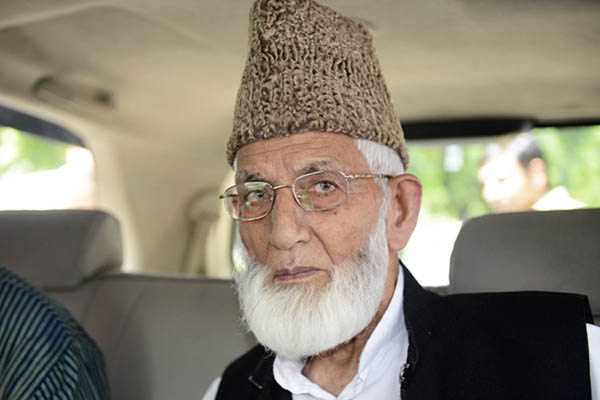 Pakistan says meeting with Kashmir’s ‘genuine stakeholders’ is established practice and it will not deviate from it.

India said Friday it has urged Pakistan against meeting Kashmiri separatist leaders ahead of rare weekend talks between the two countries’ top security advisers in New Delhi, hiking tensions between the rivals.

The foreign ministry said it would be inappropriate for Pakistan National Security Adviser Sartaj Aziz to hold the meeting on Sunday in Delhi just before scheduled talks with his Indian counterpart Ajit Doval.

India cancelled talks with Pakistan last year between their foreign secretaries, outraged over a similar meeting that took place, a move that set back already tense relations between the neighbors.

“India has advised Pakistan yesterday that it would not be appropriate for Mr. Sartaz Aziz to meet with Hurriyat representatives in India,” foreign ministry spokesman Vikas Swarup said on Twitter. “Such a meeting would not be in keeping with the spirit and intent of the Ufa understanding to jointly work to combat terrorism.”

Pakistan said Friday it would push ahead with the meeting despite India’s “advice,” calling the pro-independence leaders “genuine stakeholders” in efforts to find a solution to the dispute over the Kashmir region. “Pakistan sees no reason to depart from this established past practice,” of meeting leaders ahead of talks, the foreign ministry in Islamabad said on in a statement.

Indian Prime Minister Narendra Modi met Pakistani counterpart Nawaz Sharif during a visit to the Russian city of Ufa last month, with the hour-long talks seen as a new thaw in ties between the countries.

Separatist leaders from Indian-administered Kashmir said this week they were invited to meet Aziz on Sunday, just before the top security officials are due to hold their talks.

Pakistan has in the past described such meetings with pro-independence leaders as a “longstanding practice” to “facilitate meaningful discussions.”

More than six civilians have been killed in an increase in cross-border shootings between the two countries’ troops in disputed Kashmir in the lead-up to the talks. Pakistan and India have fought two wars over the Himalayan region since both gained independence in 1947, and it remains a major source of tension for the two countries.

poor Nawaz Sharif, he is the prime minister of Pakistan, but the real power is with the Establishment/ PA nexus. Nawaz got hell from the Establishment aroused sentiments, that he has to now change the agreed agenda, and insist on wanting to add Kashmir.

Nothing can come out of this meeting on Terrorism, even if it does go ahead.