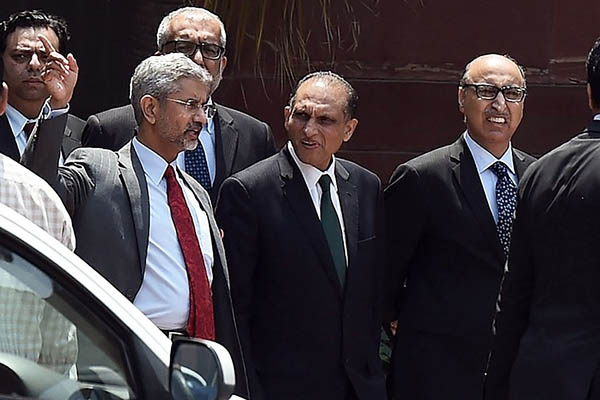 Talks between foreign secretaries of neighboring nations encompassed all issues, according to Islamabad.

New Delhi urged Islamabad on Tuesday to make “visible progress” on a probe into a deadly attack on an Indian air force base, during a stalled meeting between their top diplomats.

India and Pakistan postponed talks between their foreign secretaries in January after the assault, which Delhi blamed on a banned Pakistan-based group, left seven soldiers dead. The Pathankot air base attack came just days after Prime Minister Narendra Modi became the first Indian leader to visit Pakistan in 11 years, raising hopes of a softening in relations between the neighbors.

Indian foreign secretary S. Jaishankar and his counterpart Aizaz Ahmed Chaudhry met in New Delhi on Tuesday on the sidelines of a regional conference.

“India’s FS [foreign secretary] emphasized the need for early and visible progress on the Pathankot terrorist attack investigation as well as the Mumbai case trial in Pakistan,” Indian foreign ministry spokesman Vikas Swarup said. “FS clearly conveyed that Pakistan cannot be in denial on the impact of terrorism on bilateral relationship. Terrorist groups based in Pakistan must not be allowed to operate with impunity,” he said in a statement.

The Pakistan High Commission also said in a tweet that its foreign secretary underscored Islamabad’s commitment to “friendly relations” with all of its neighbors including India.

India and Pakistan have fought two of their three wars over Kashmir and diplomatic relations over the region remain tense. Pakistan investigators last month visited the scene of the Pathankot attack close to the border in northern Punjab state, as part of its own probe.

India has blamed militants from Pakistan-based Jaish-e-Mohammed for the attack, which led to two days of gun battles. India’s Defense Minister Manohar Parrikar has told parliament that the attack could not have been carried out “without the [Pakistan] state’s support.”