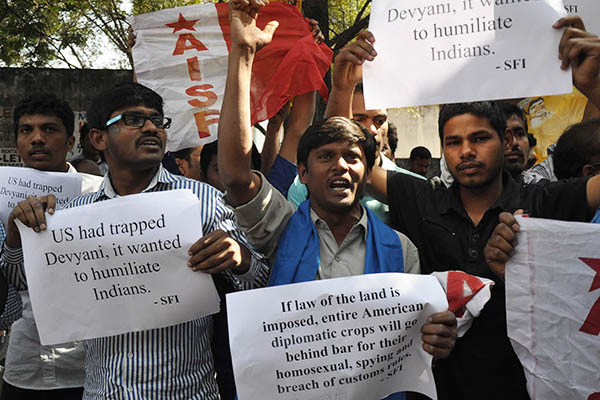 India on Thursday urged the United States to drop its case against a female diplomat who was arrested and strip-searched, and asked for an apology over her “terrible” treatment, ratcheting up pressure in the blistering diplomatic row.

U.S. Secretary of State John Kerry expressed “regret” over the episode in New York, and India’s External Affairs Minister Salman Khurshid said he hoped the “valuable relationship” with Washington would soon return to an even keel.

But in a sign of the bruised pride and humiliation felt in India, Khurshid reiterated calls for the visa fraud case against the diplomat to be withdrawn and branded her treatment as “terrible.”

“We have asked for the case to be dropped and withdrawn … we are not convinced that there are legitimate grounds for pursuing it,” Khurshid told foreign journalists. “I cannot believe if a U.S. senator was arrested he would be put through this behavior … I would rather not prejudge. Let us allow the American government to respond.”

Kerry tried to end the row in a phone call to India’s national security adviser on Wednesday, expressing regret and stressing concern that the issue not be allowed to hurt a “vital relationship.” But Parliamentary Affairs Minister Kamal Nath said “a mere regret won’t make us happy. They must offer a clear apology and accept that they made a mistake, that is what we will be satisfied with.”

The row was sparked by last Thursday’s arrest of Devyani Khobragade, India’s deputy consul general at its mission in New York, as she dropped her children off at school. The 39-year-old, who is now free on bail, was detained over allegations that she paid an Indian domestic worker in New York a fraction of the minimum wage and lied about the employee’s salary in a visa application.

Subsequent revelations that she was strip-searched have caused outrage in India and prompted a series of reprisals, including the removal of protective barricades outside the American embassy.

In an interview with Indian television, Khurshid acknowledged there was “a sense of hurt” over the treatment of the diplomat at a time when the Obama administration is looking to bolster ties with New Delhi. “Things happen between friends, even things that are terrible,” he told the CNN-IBN network. “My duty is not to allow anyone to damage relations, the relationship,” he also told reporters. “We hope it will return (to normalcy) very soon.”

The diplomat’s father pressed for his daughter’s release, saying he would go on a hunger strike if action were not taken. “No compensation is enough. We are not beggars,” Uttam Khobragade added.

The U.S. State Department said it was “particularly important to Secretary Kerry that foreign diplomats serving in the United States are accorded respect and dignity just as we expect our own diplomats should receive overseas.”

Khurshid has confirmed India is transferring Khobragade to its U.N. mission in New York to secure her full diplomatic immunity, instead of the partial immunity she currently has. However such a move could prove complicated as any change of designation requires the U.S. State Department’s approval.

In an email to colleagues published Wednesday, Khobragade wrote that she was repeatedly strip-searched and then subjected to a cavity search.

However Preet Bharara, the U.S. federal prosecutor handling her case, has insisted Khobragade was arrested in the “most discreet” way possible, was not handcuffed and was “fully searched” by a female deputy marshal in private as part of standard procedure. Bharara insisted his sole motivation was to uphold the rule of law, protect victims and hold accountable anyone who breaks the law “no matter how powerful, rich or connected they are.”

But India’s foreign ministry spokesman lashed out at Bharara’s comments, saying “there is only one victim in this case (and) that victim is Devyani Khobragade.”

The worker is said to have been paid just $3.31 an hour—well below New York’s required $7.25—despite signing a contract to pay her three times that amount for childcare and other services. Such wages however are well above the average in India.