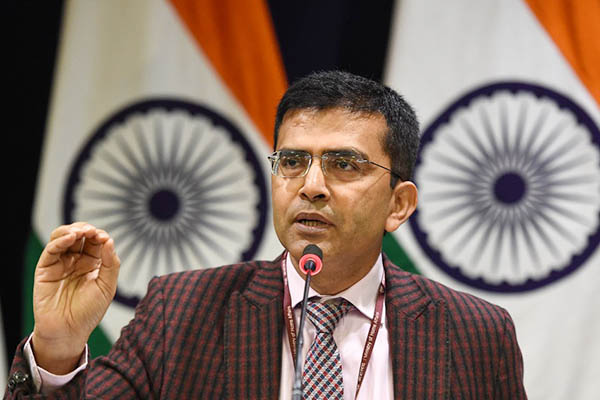 India on Tuesday warned China that the government’s contentious move to strip Kashmir of its autonomy and split the region into two parts was an “internal matter” after Beijing slammed the “unilateral” decision.

India, Pakistan and China claim all or parts of the disputed Himalayan region, with New Delhi’s announcement on Monday sparking a fierce response from its two neighbors. Beijing was particularly critical of India’s decision to turn India-Occupied Kashmir’s mostly Buddhist region of Ladakh into an administrative territory directly ruled by New Delhi.

“China is always opposed to India’s inclusion of the Chinese territory in the western sector of the China-India boundary into its administrative jurisdiction,” Foreign Ministry spokeswomen Hua Chunying said. “Recently India has continued to undermine China’s territorial sovereignty by unilaterally changing its domestic law. Such practice is unacceptable and will not come into force.”

The Indian government said Ladakh’s new designation as a “union territory” was “an internal matter concerning the territory of India.”

“India does not comment on the internal affairs of other countries and similarly expects other countries to do likewise,” Indian foreign ministry spokesman Raveesh Kumar said. He added that both sides had committed to maintaining “peace and tranquility in the border areas.”

The disputed borders between India and China have been the subject of fruitless talks since 1962, when the two nations fought a brief but brutal war over the region.

Prime Minister Narendra Modi said late Tuesday his government had fulfilled a longstanding demand of the people of Ladakh to be declared a territory of India’s union. “Special congratulations to the people of Ladakh!” Modi tweeted. “This decision will give impetus to the overall prosperity of the region and ensure better developmental facilities.”