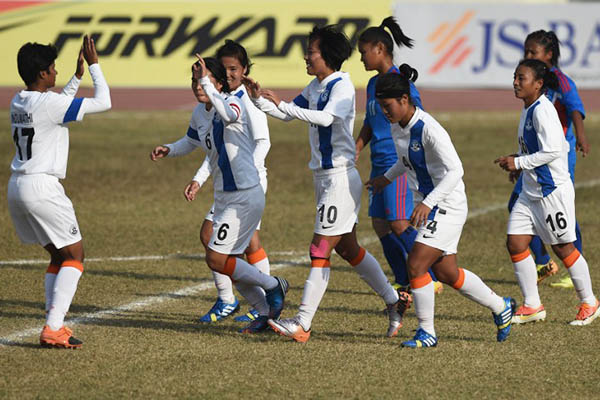 Latest victory is India’s third consecutive victory of the championship, establishing its dominance in the sport.

Ngangom Bala Devi was the star of the show, bagging four goals and running the Nepalese defense ragged. The win cements India’s place as the dominant force in women’s football in the region—they have won all three editions of the championship since it was launched in 2010.

India and Pakistan are normally bitter rivals in sport, but Devi said support from the home crowd had inspired her. “I am feeling so good to score four goals today. I received so much love here in Pakistan that made me improve my performance,” she said after the match.

It was the first high-profile regional women’s sports event in Pakistan, but the home side made little impression on the tournament.

Indian captain Oinam Bembem, who is retiring, voiced her jubilation at ending her career on such a high note. “I am very happy to lead my team to three-time title victories in the SAFF championship. I am more happy because I am retiring from the SAFF championship after this and I am leaving at a good point,” she said.

Bembem also praised Pakistan, saying they had put a good show despite their inexperience—though they went out in the first round.

Women’s sports were once taboo in Pakistan, but former president Pervez Musharraf opened the way during his near decade-long tenure from 1999 to 2008. The first women’s national championship was held in 2005 but players were required to follow a strict dress code, wearing trousers instead of the shorts normally worn by the players.