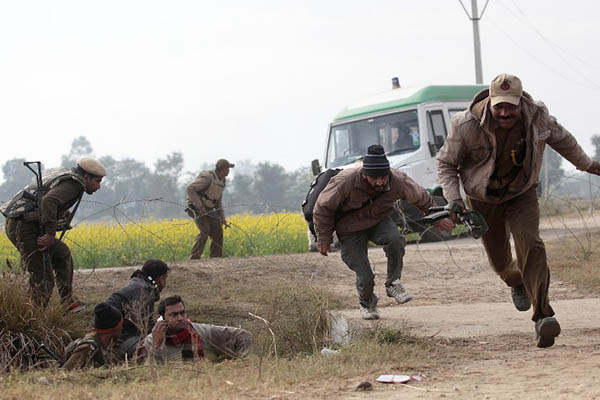 An Indian soldier was also killed in the gunbattle that was believed to be an attempt to disrupt elections.

The Indian army killed six rebels during a two-day gunbattle in Indian-administered Kashmir, which was believed to be an attempt by militants to disrupt elections in the region, a spokesman said Wednesday.

An Indian soldier was also killed in the fighting, which started on Tuesday when militants crossed the heavily fortified border with Pakistan. “A junior commissioned officer and six infiltrators were killed in the operation, three of them yesterday,” said army spokesman S. D. Goswami. Four other soldiers received minor injuries during the battle that has now ended in the snowy and mountainous Naugam sector, he said.

The army said the battle was fought at an altitude of more than 14,000 feet “with [the] likely aim of terrorists to disrupt elections” which are ongoing in the region. “A major infiltration bid foiled by army,” the army also tweeted. “Terrorists equipped with latest winter clothing and accessories.”

Another attack on Wednesday injured five policemen and a civilian. Militants threw a grenade at a paramilitary police patrol in the village of Puhu in Pulwama district, a local police officer said on condition of anonymity. Four paramilitaries, another policeman and a civilian were hurt.

Voting took place on Tuesday in the tense Muslim-majority region for the staggered state election. The Hindu nationalist party of Prime Minister Narendra Modi is for the first time campaigning hard to win the poll. Turnout has so far been high as voters defy calls by hardline separatists to boycott the election over India’s rule of the region.

Kashmir has been divided between India and Pakistan since the two countries won independence from Britain in 1947, but both claim the picturesque territory in full. About a dozen rebel groups have been fighting Indian forces since 1989 for independence or for a merger of the disputed territory with Pakistan. The fighting has left tens of thousands, mostly civilians dead.

These militants are not coming on their own. These are trained and paid by Pak army and sending to Indian territory. India should not engage Pakistan for a dialogue unless they i.e. the Pak create such an atmosphere that there is no terrorist attack / border shelling. Let them create a congenial atmosphere. Forget about Mirwaiz Umar etc. After all, they are Pak based people only. He is advising India to talk first. He is forgetting beheading of Indian Jawan, two mumbai attacks, parliament attack, Kargil war, 2014 small scale border war etc. Mr. Umar, you go and work in an office and look after your family well and say thanks to God.

We the public appeal the Government of India not to start any dialogue with Pakistan unless they behave well. The ongoing attack by militant is purely pak based. They are being trained and paid by Pakistan. Unless they prepared to create a congenial atmosphere, there should not be any talk. If we invite them for a talk, then it will affect our prestige.

What do you expect? You left us with no option. To begin with, it’s a strategic compulsion for Pakistan to engage India, otherwise, India will create problem in Baluchistan and KPK. We have to contain Indian army and keep it locked up in Kashmir. If we don’t India would be free to support insurgencies in our country. We all know, that India is supporting Baluchi nationalists and is also helping proxies to destabilize Pakistan. I say, we own this because it is necessary for us to tie down an enemy that is 5 times bigger then us in size, population and defense budget. Stop electing lunatics like Modi and stop supporting anti – Pakistan elements in Afghanistan. It is you who gave us no option. Yes, we support militants because if we don’t you’ll make our life miserable through your supported terrorists. Enough indians

What is your proof that India is supporting anything in Pakistan? Have you caught even a single Indian you can claim that he/she was involved? World has proof that you are supporting terrorism in India, Afghanistan, China. Every Terror act has a Pakistani footprint and the planners, executors are arrested from Pakistan. What is your arguement on China and Afghanistan? China is your self-appointed friend so why are your countrymen supporting Uighur movement in China?

Which community is getting slaps from European and american countries. Few mulsim countries are also joining with Europe & America and giving good boosting to that particular community. Why they are slapping you only. What is the reason. Your demand will not acceptable even in Padala loka (hell.) Whoever is not interested to live in India. those can very much join Musharraf. We gave befitting reply during Kargil, and in the recent border war (small scale). India taught them a lesson. In future also we will teach them a lesson. It is understood that Sind Baluchistan will become an Independent country either today or tomorrow. You go and study well, take job abroad and look after your parents and siblings well and say thanks to GOD.

As usual you the Pakis will face defeat.