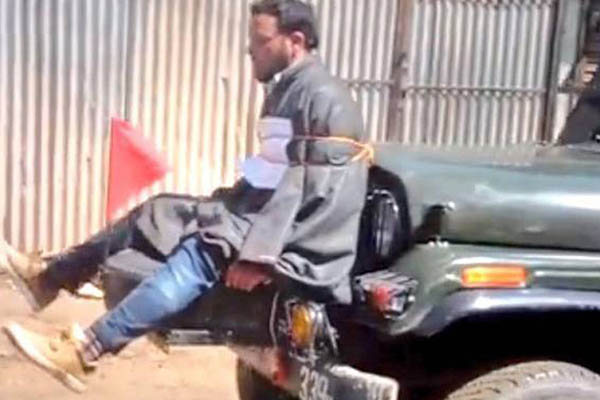 Activists allege India’s military has been using human shields since the late 1980s.

The Indian army is investigating allegations a man was tied to a jeep and used as a human shield by soldiers in India-administered Kashmir after video of the apparent incident generated outrage.

The 11-second clip, which went viral on social media Friday, showed an unidentified man bound to the front of an army jeep as it led a convoy through Budgam district in India-administered Kashmir. A voice speaking Hindi in the background can be heard saying “stone throwers will meet a similar fate,” as villagers watch.

Army spokesman Colonel Rajesh Kalia said in a statement on Friday the video was being examined. “The contents of the video are being verified and investigated,” he told AFP.

Budgam district was the scene of violence this week as police and paramilitary officers opened fire on thousands of protesters shouting slogans against Indian rule during a local poll. Eight civilians were killed and dozens wounded in the election violence, including troops who were pelted with stones. The footage of the man bound to the jeep caused outcry and demands for an immediate inquiry.

“This young man was TIED to the front of an army jeep to make sure no stones were thrown at the jeep? This is just so shocking!!!” the state’s former chief minister and opposition leader Omar Abdullah posted on Twitter.

Rights activists say Indian forces in Kashmir have been using human shields since the late 1980s, when an armed insurgency against Indian rule erupted across the territory. “These kinds of crimes have gone unnoticed here for decades. Now, because of an explosion in social media, it’s finally coming out,” Kashmiri activist Khurram Parvez told AFP.

Last month, a photo of an 11-year-old Kashmiri boy being forced to do sit-ups by Indian troops triggered widespread condemnation.

Kashmir has been divided between India and Pakistan since the end of British rule in 1947. Both claim the territory in its entirety. For decades rebel groups have been fighting the roughly 500,000 Indian soldiers deployed in the territory, demanding independence or merger of the region with Pakistan. Soldiers battling armed rebels often come under a hail of stones from civilians in the Muslim-majority region, where anti-India sentiment is rife.