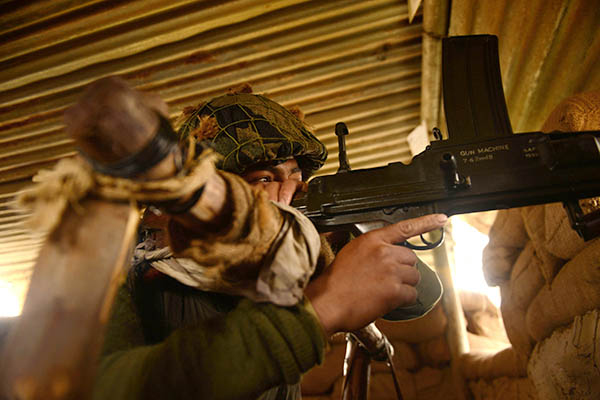 India’s army will take “all possible steps” to counter any ceasefire violations by Pakistan along the border between the countries, the Indian defense minister said Monday, warning Islamabad not to take New Delhi’s restraint for granted.

Skirmishes have erupted across the heavily militarized Line of Control (LoC), the de facto border in Kashmir, since five Indian soldiers were killed earlier this month in an ambush that India has blamed on the Pakistan Army.

“Our restraint should not be taken for granted nor the capacity of our armed forces to protect the sanctity of the LoC,” Indian Defense Minister A. K. Antony told parliament’s upper house.

“Now our army will take all possible steps—sometimes strong action—to effectively retaliate against every violation along the LoC,” he added.

Islamabad has denied involvement of its soldiers in the ambush, one of the deadliest in years targeting Indian troops in the disputed Muslim-majority region. Kashmir has been the trigger of two of the three wars between the nations.

The renewed tensions have jeopardized plans for what the two governments hoped might be a breakthrough encounter between Prime Minister Manmohan Singh and his Pakistani counterpart Nawaz Sharif on the sidelines of a U.N. meeting in New York next month.

Antony alleged that Pakistani soldiers were behind as many as 82 ceasefire violations on the border this year and warned of consequences on the country’s long-term relations with Islamabad.

“Naturally this incident will have consequences on our behavior at the LoC and on our relationship with Pakistan,” he said.

India and Pakistan have mainly engaged in small-arms fire since the 2003 ceasefire agreement and refrained from heavy artillery battles.

Who will attack whom, the smaller country will attack the bigger one? It is only a question of common sense but I resent that we always keep it locked in cupboard. How can such news be rated as sensible, reliable and authoritative?